When a painter sits before a strong man whose soul and purpose he is trying to put upon canvas, he is, if he feels deeply and sincerely, passive as well as active. He watches his subject grow of its own force into its own image, albeit, under his deft guidance of understanding and of sympathy. Then, when his man comes forth as if having been created the second time through the fashioning of his own hand, he stands away and looks upon his work, and sees that it is good. Then, taking his way carefully about from one angle point to another, he discerns here and, then, there, perhaps a touch of kindness that may not have been sufficiently emphasized to be entirely true to the real man before him; or a touch of decision, or a touch of tolerance, or a touch of wisdom, or a touch of prudence, or foresight, or action or what not. He breathes breath after breath of his nostrils into the deadness of oil and brush, until with eyes illuminated he exclaims: “Behold, here is a living soul of my strong man there!”

When a man of great results has reached the age of three score and ten, there are written in the story of his heart many-colored pages. This friend, or that, may have been privileged to read a page or maybe more of this story. But when the whole must be told together— these pages must be assembled as they are gathered one by one, here and there, from the lips of those who lived afterward. Thus the story like the portrait proceeds toward its own proper conclusion. Then the viewpoints are taken from this angle and that until revision has crowned the work.

“…I have undertaken at the behest of those who love his memory to tell the story of the life of Raleigh Rutherford Haynes.”

With such thoughts in my mind I have undertaken at the behest of those who love his memory to tell the story of the life of Raleigh Rutherford Haynes. The more I scanned the pages that were supplied to me by old friends and new, the more I felt the carefulness which was forced upon me in putting the pages together, and the necessary inadequacy of the result when all would have been written.

The children of the father, who so recently has been taken from the fine working forces of the State and county, have been silenced by the sudden blow of his death.

This then, not from them, is a passive reception on my part from those who have seen and known him. The results will have come together of itself, the writer being rather the editor that the fashioner of all that will have been forthcoming.

Great steel structures of this day are begun from the top where long ago the building was wont to end. In undertaking the putting together of the structure of this strong man’s life and work, it is hard to know whether to begin February 6, 1917 that golden day in Florida on the Manatee, where in St. Petersburg, he died in an instant with a smile that lingered even after death, or June 30, 1851, at the scant settlement of Ferry, Rutherford County, North Carolina, where one of eight children, Raleigh Rutherford Haynes first came face to face with the struggles that were to follow.

Over the mantle of the sitting room of his house at Cliffside, N.C., there now hangs the portrait of Abraham Lincoln. Its presence somehow, “controls” his room. Other details seem to vanish except the old armchair and personal private desk just under the sad Lincoln’s face.

In that face always before him, it seemed to me must be written invisibly a page of the story of this man’s life, and I sought it out. Even those nearest him did not seem to know the real meaning of its being there. There seems to have been only one man who knew, and from him I got the meaning almost by accident.

What Bound Him to Lincoln

“That picture!” exclaimed R. L. Watkins with whom I was talking—“Why I have heard Raleigh say a many a time, ‘Lincoln was a great man, I like him because he and I both came out of a log cabin.’” Mr. Watkins, 69 years of age, had been a playmate of “Raleigh” Haynes around Ferry countryside. Mr. Watkins was his close friend always and lives now only ten miles from Cliffside, the great cotton mill settlement with which Mr. Haynes climaxed his work.

The log cabin whence came Raleigh Haynes stands partially today though it was never the humble structure whence came Lincoln. For there were the mother and father, Charles H. Haynes, and eight children to be housed there. The eldest of these children is living now in Rutherfordton, Mrs. Letitia Arnold Haynes Carpenter. She is past 70, and her attitude toward her brother, Raleigh, was, perhaps, a mothering attitude. They were greatly devoted to one another. Mrs. Carpenter has the light hazel-blue eyes of her brother—the “eyes of the Haynes’s,” as she says. 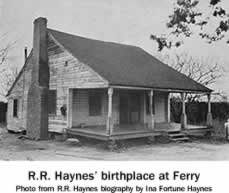 I told her of the Lincoln log cabin story. She quietly remonstrated somewhat. “It is true,” she said, “that we were not folks of means, but the house we had was such as was common in those days throughout that country. It had an ample number of rooms to take care of the family with two wings on the main body of the house—which, alone, is standing now. My father had weathered boards put on it inside and out, and we were comfortable. We entertained visitors, and they put up at our home, and they were well taken care of—they and their horses while they stayed. My father, Charles H. Haynes was, as I said, not a man of means, but he had two hundred acres of land, he was sheriff of the county; besides he was a teacher. He taught me and the children of the neighborhood, and after his death I taught my brother, Raleigh. I am not over-proud, but all these pieces that come out about my brother seem to harp on his coming from the humblest and poorest beginnings. This is not so. I know these pieces are written to make it appear that my brother must have been all the greater man to have come from the worst to the best, but he was a big enough man anyhow to have started and ended as he really did. My father was a remarkable man, systematic, had had a good high school education, had a good farm with corn and wheat and stock, attended to his duties, was a man of high character and hard-working. From what he taught me, I taught school myself eight years. We got along fairly well for a big family until my father died. Then Raleigh was about eight years old. That left my mother with eight children, but we did not suffer. We saved, and worked and were helped besides by my mother’s folks.”