Before there was a Cliffside, perhaps even before R. R. Haynes conceived the idea of a Cliffside, the great man’s full attention was on building the mill and developing the town called Henrietta. His partners in the venture were S. B. Tanner and J. S. Spencer, Tanner’s father-in-law. The town and mill were named after Henrietta Spencer, J. S.’s wife. In the mid 1890s, Haynes moved from his old home place at Ferry to a grand new house he had built on Henrietta’s N. Main Street. The construction was supervised by G. K. (Kelly) Moore, who was later to play a major role in the planning and building of Cliffside. On one of the last days of construction, Mr. Haynes had a photographer capture this scene for posterity.

The man at left in the dark vest is Kelly Moore, the construction overseer. The other men are some the carpenters and helpers who worked on the project. (Photo courtesy Hazel Haynes Bridges)

In 1902 Raleigh Haynes left Henrietta and moved to yet another new home, this one in Cliffside on the spot where the clock tower now stands. For much of the next 50 years the Henrietta house was occupied by Raleigh’s oldest daughter, Florence, her husband Zebulon O. Jenkins and their seven children. Florence died in 1954 and soon after the house was sold to the Gene Holland family of Henrietta.

In 1999 the home was sold to Hubert and Theresa Luckadoo who have done much to restore the home to its former elegance. It is a showplace on N. Main Street just a short distance up from the “corner.” 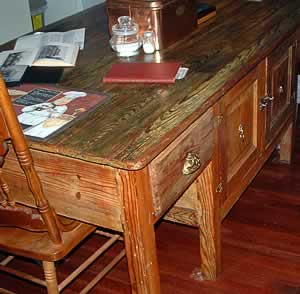 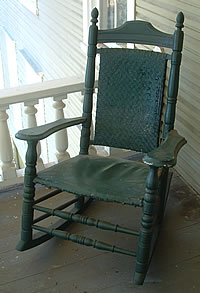 In the Luckadoo’s kitchen, left over from the Jenkins years is this old pine “teaching” table (above) from the R. R. Haynes Memorial Building in Cliffside. In the 1920s and ’30s classes were held in the upper rooms of the Memorial Building in “domestic science” (home economics) and other subjects. On the upper porch the Luckadoos reserve a special place for R. R. Haynes’ old leather-bottom rocking chair. (Photos by Reno Bailey)

Many of the house’s interior features of bygone years have been preserved. Most of the walls and flooring are of the original wood. To see some of the interior and a few architectural features, and read more on the Luckadoos and how they acquired their dream home, see “Mill Workers Buy Mill Owners House.“