In the years past between 75 and 100 families have moved away from Cliffside to buy farms with money they have saved at the mill.

Several years ago Mrs. Padgett, a widow, with six small girls, moved into Cliffside. All of the children were too small to aid in supporting the family. This courageous woman entered the mill as well as the girls when they were old enough, and began to save their earnings to invest them in brains. To finish briefly a tale of real heroism, it may be merely added that this good woman sent three of her girls through high school and one through college. One of these daughters is today employed in the mill where she has a responsible position which pays over $40 a month; another is matron and teacher in the Home Industrial School, Asheville; two are students in the Normal and Collegiate Institute, Asheville, and the youngest is in school at the Asheville Home Industrial School.

It is to this ambitious type of millworkers that R.R. Haynes offered a helping hand. By his aid and by the aid of his superintendent, many young boys have gone out from the mill to bigger things. You will find them today in the school room as instructors; in the pulpit as ministers of that gospel which the quiet little man back in Cliffside ever tried to practice in daily life. 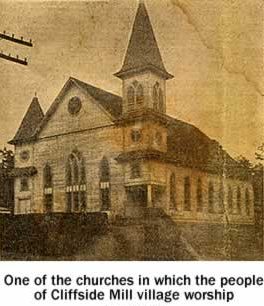 No wonder Mr. Haynes was proud of “his people,” as he called them and it is not strange that every one of the 900 men and women, boys and girls, employed in the mill looked upon this kindly man as their benefactor, their counselor in trouble—their friend.

Schools facilities in Cliffside are ideal. A regular graded school, open six to eight months in the year, is accessible to the children of all employees. The mill gets a certain amount from the county for maintenance and supplements the balance of the cost. The company built the building, and the company as well as Mr. Haynes personally not only gave sites free but helped to construct the three churches in the village. Six teachers are employed in the school.

In the matter of church building, Mr. Haynes showed that fine common sense which had made him a success. He didn’t build these churches outright but he informed his workers that if they wanted good church structures and would help to build them, he would do his part. He put up a third or more of the cost, and the congregations finished out the amounts needed.

A word about the mill itself: It is built on the Second Broad River and the “falls” afford most of the power necessary to run the machinery, the balance being generated on the ground. The mill is built to conform to the sloping hillside on which it is built, a part of 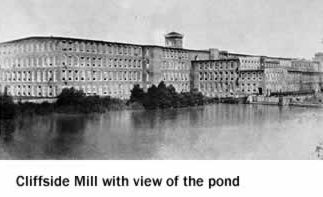 the building being four stories in height, the balance being three and two stories. To be exact, 1600 horsepower is developed from the stream and 1200 horsepower from steam. The company grinds its own indigo and has all the equipment necessary for turning out finished staple and fancy ginghams on the ground. The mill uses 7500 bales of cotton per year. The output of the company is sold through the Cone Export and Commission Company of Greensboro and New York. The company still operates under the original capitalization, which was $250,000, although the property is worth two and one half times this amount today, or more. The mill is of standard equipment with safety and sanitary facilities.

R.R. Haynes was president of the corporation. His son, Charles H. Haynes, is vice-president and treasurer; Z.O. Jenkins is secretary and W.L. Packard is superintendent, having held this responsible position for ten years.

The plant is equipped with 41,000 spindles and 1500 looms. Seventy thousand yards of staple and fancy ginghams are turned out daily.

Nine hundred workers are employed in the plant. At least 60% of this number have been with the company for 10 years.

The mill was built in 1902, and it is a strictly North Carolina proposition in every sense of the word. Every overseer and man of important position in this plant has been brought up from the ranks.

The community has regular cleanup days twice a year, generally in the Spring and in the Fall. Every family in the village takes a lively interest in cleaning premises of debris and trash of all kinds. Last summer on cleanup day, 23 wagons were employed in moving trash. The best things about these regular cleanup days is that their spirit lives throughout the year, and the visitor invariably notes quickly the spotless appearance of the whole town.

One of the gala events of last Summer was the baby show. There were entered in this show 120 fine babies. The prize winner whose picture appears on this page is the daughter of parents who have been steadily engaged in mill work since childhood. The winner’s name is little Miss Inez Fisher, daughter of Mr. and Mrs. H. C. Fisher.