When R.R. Haynes was a small boy, his grandmother sent him on an errand that would carry him into the section now known as Cliffside. It was a wild section, a veritable wilderness. This was one of the few things that R.R. Haynes undertook to do and failed at the job. He got lost. He couldn’t find his destination.

But this boyhood failure was more than made up in later years, for to this one man alone falls the credit for having established one of the most perfectly laid-out towns to be found anywhere in the country.

R.R. Haynes has written his very character on the surface of these rugged hills. He has done infinitely more—he has left the imprint of a clean and wholesome life upon the souls of hundreds of boys and girls who have come to settle in this mill village.

Everything that one sees in the Cliffside neighborhood belonged to Mr. Haynes, or to his company.

The company owns something over 700 acres of land in the tract on which the mill is situated and in addition to this Mr. Haynes personally owned six to eight hundred more acres adjoining, not to mention a railroad that runs from Cliffside to Cliffside Junction (where it connects with the S.A.L. Railway), and all the adjuncts and institutions pertaining to a modern town, banks, ice plants, school buildings, etc.

But with these worldly possessions one seldom meets a man more simple in his ideas, more gentlemanly, more kindly in his daily intercourse with the people of the village than was Mr. Haynes. The pretty little town of Cliffside has never been incorporated. The word of Mr. Haynes was law, but he did not abuse his authority. Neither did he fail to exercise it if undesirables came into the village confines.

There are many things you find in Cliffside seldom found in other towns. There are many things you don’t find there, too, which about in other towns. You don’t find in all of Cliffside a dog. If a man comes to the mill with a canine adjunct to the family paraphernalia, he is politely informed that if he thinks more of his dog than he does of his job to move on.

“He would walk along the streets studying and scheming by what means he could make more beautiful and more comfortable the home surroundings of his workers.”

Cliffside is a Veritable Dogless Eden.

You don’t find in Cliffside questionable characters, bootleggers, profane men or drunkards. The town is too big for the blind tiger and the prostitute and if an undesirable drifts in, departure is quick and certain.

Not only is the moral tone of the village clean and sure, but also its whole aspect is inviting and attractive.

Mr. Haynes took a deep and sympathetic interest in the personal welfare of each of his employees. He went further and interested himself in the kind of home environment thrown about them. The matron of the hotel talked continuously of his good work, as did everyone else interviewed. She said that Mr. Haynes was a man never satisfied with present conditions–he was always trying to effect improvements. He would walk along the streets studying and scheming by what means he could make more beautiful and more comfortable the home surroundings of his workers.

And as a result of these years of constant effort along these lines, this man wrought marvels in town buildings. He laid out the streets with such and tastes and the pretty cottages flanking them are as neat as a pin. Streets and dividing lines between lots in this town are marked almost universally with finely cropped hedge. Flowers, too, grow in profusion for through the years Mr. Haynes offered substantial prizes for the best flower gardens and for the best-kept premises, and his workers took a lively interest in the art of home beautification. In the mill windows you find luxuriant flowers of all kinds.

Nature did her part in preparing this setting for a pretty town and Mr. Haynes [???] work through the years. All of his 400 cottages are set upon lots which afford the finest kind of natural drainage.

“Typhoid fever is a practically unknown quantity in Cliffside and there has never been but little sickness in the town.”

This may not be the city of seven hills but it is a town of numerous hills and upon the sloping summits of these hills rest prettily built and neatly painted houses, bordered with hedges and flowers of all kinds. The workers in the mill have all the comforts enjoyed by city folk. All homes are lighted by electricity. These houses are large, running from three to eight rooms each and sanitary arrangements are of the best. Surface closes receive daily attention, and as a result of the measures taken to promote health, this is one of the most healthful communities to be found anywhere. Typhoid fever is a practically unknown quantity in Cliffside and there has never been but little sickness in the town.

Water Supply is a Boost

The water supply at Cliffside is the boast of the town. Over the village there are several deep-bored wells, some dug wells, and right near the mill there is a well over 300-feet deep which furnishes as good white sulfur water as can be found anywhere. Water is pumped from this well by power from an electric motor. There is another deep well near the mill, the water from which has some iron in it. The pure water supply has played an important part in the remarkable health of Cliffside.

I may say here in full justice to others at this mill that Charles H. Haynes, a son of the founder of the mill, as well as other sons and as well as the mill superintendent, W.L. Packard, have given their best efforts to carrying out the humanitarian policies of R.R. Haynes.

It is a fine type of gentlemen one meets in this village.

I noticed that as a lady passes along the street, every man immediately doffs his hat—a chivalric custom among strangers, which alas is passing out in these more practical days. Everybody, too, seems happy and a healthier looking lot of people it would be hard to find. 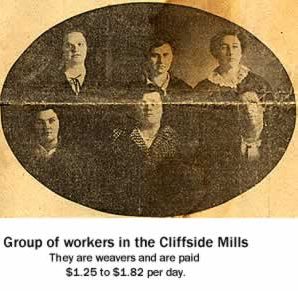 As an indication of the sterling qualities of the operatives in this mill, it may be stated here that they are almost without exception intensely religious, deeply interested in matters of education and thoroughly industrious.

On the day I was at the mill there was a deposit (with the mill company) the sum of $51,406.68 of money belonging to the mill operatives. This large sum has been placed with the mill company by mill workers where it draws interest at the rate of 6%, the company paying this high rate on deposits in order to encourage savings.

These people in the Cliffside Mill are independent. They have their earnings and invest their money in education and in homes.

A few days previous to this four young ladies employed in the mill had come to the mill office and deposited out of their savings $420.

It is natural that with such thoughtful policies in effect, few operatives ever leave this mill unless it is to better themselves by going into business on their own account. Occasionally this happens.