Ina Fortune Haynes was a housewife and Cliffside’s most prolific writer. In the early Fifties she wrote the biography of her father in law, Raleigh Rutherford Haynes. Earlier, in the late Thirties and early Forties, she wrote periodic columns for local papers, primarily for the Forest City Courier, and not as often for the Rutherford County News and the Shelby Star. It must have been Ina’s idea for the column title, for no one else would deem them “Unimportant,” or relegate them to the “Scribblings” category. 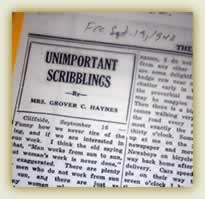 Her byline was never “Ina Haynes” but the formal “Mrs. Grover C. Haynes.” If Mrs. Haynes wrote of human subjects at all, it was of her husband and son, infrequently and never by name. And she rarely mentioned anything about the town of Cliffside. She wrote of household and garden chores, cooking, flowers, the mountains, daily life and her own feelings and thoughts. We have come to enjoy these old columns for their sly and quaint observations, which sweetly reflect those innocent times. 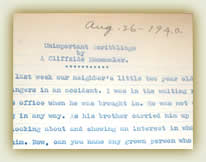 We discovered about 30 of them in our newspaper archives, then Janice Bridges Swing found even more in her grandmother’s effects, typed neatly on brittle, yellowing newsprint and kept in a folder labeled “Writing Portfolio.” It also contained copies of Mrs. Haynes’ “Town Clock” and other essays. The last column we can find was printed just a month before Pearl Harbor.

In early 1942, Mrs. Haynes was named Acting Postmistress, replacing Andrew Love, who went off to war. She held that position until 1947. Work at the post office filled her days, so the Scribblings task was put aside, although she did, from time to time, write Cliffside News columns for the Courier.

Grover, Jr., the son of whom she often wrote, also went to war, serving in the Navy in the Pacific. Prior to the writing of these Scribblings columns, the Haynes’ daughter, Hazel, had “left home,” having married Paul Bridges in 1937.

Select the stories by date from the list at left.

To quickly move though the columns use this navigation bar below each story.