Born in 1842, Dick Jolly, grandson of James and Kisiah Jolly and son of Fertherston Jolly, was a farmer, a soldier in the Civil War, a Ku Klux Klansman, a ferryman, a deputy sheriff, a politician and, from the likes of his book we’re republishing here, a genealogist of sorts, with an exceptional memory. The book was written in 1924 when he was 82 years old.

He lived in several places over his lifetime, including Georgia, but if you drew an oval on a map to include lower Rutherford and Cleveland counties of North Carolina and upper Cherokee and Spartanburg counties of South Carolina, that would give you his “stomping ground.” He never strayed far, in heart and soul, from Broad River. He makes frequent references to Shelby, Boiling Springs, Mt. Pleasant, Camps Creek Church, Grassy Pond, Cowpens Battle Ground, Chesnee and to Gaffney—where he sometimes lived. That’s where he died in 1928.

His service in the Confederate Army put him on Sullivan’s Island just days after the capture of Ft. Sumter, in Charleston Harbor, from the Federal troops; at the First Battle of Bull Run; in numerous battles defending Richmond, including the horrific one at Seven Pines, where he was wounded. After weeks in a Virginia hospital, Richard made it back home, one of the few lucky ones in his regiment to return.

He claims to have played a part in 1897 in creating a new county in South Carolina (carved out of the existing counties of York, Union and Spartanburg), and in getting it named “Cherokee.” And we learn that Gaffney was originally called “Gaffney’s Old Field.”

He was a proud white supremacist who, in the Reconstruction years of the late 1800s, was plagued by the “Federals,” meaning carpetbaggers and actual troops. In fact, in 1876, he and his family (like many others) had to leave the area (in their case to Georgia for two years) to avoid prosecution for his Klan activities.

In his book, Richard never capitalizes the word Negro, and, as some today still resent the Civil Rights Act of 1964, one senses Dick felt the same, 60 years later, about the Emancipation Proclamation that freed the slaves. But in 1924 that was probably the prevailing attitude in the American south.

Funeral services were conducted at the Grassy Pond Baptist church Sunday afternoon by the pastor, Dr. H.V. Tanner, of Spartanburg, in the presence of more than 700 relatives and friends. Interment followed in the churchyard with Courtney’s Funeral Home in charge.

The pallbearers, who had been personally selected by Mr. Jolly prior to his death, were: Pink Bonner and Graham Vernon, Dave, Fay and Brive Jolly. The flower-bearers were Maggine Jolly, Delia Williams, Edith Self, Margaret Jolly, Myrtle Self, Mary L. Jolly, Emma Ethel Jolly and Sara Sarratt.

Mr. Jolly was born in Cleveland County, North Carolina, February 22, 1842, the son of Fertherston Jolly, a farmer. In 1856, when he was about 15 years old, the family moved to some land in Spartanburg County, where he went to school about 10 months, after which he had to stay at home to help his father.

When South Carolina seceded from the Union in 1860, Mr. Jolly enlisted in the fifth regiment, South Carolina Volunteers, under Captain J. Q. Carpenter. He served until the battle of Seven Pines in 1862, when he was wounded, which incapacitated him for further military duty.

Twelve days after the surrender of General Lee at Appomattox Mr. Jolly and Ms. Louisa Wood, a daughter of Henry and Susan Wood were married.

Mr. Jolly was prominent in Ku Klux operations after the war, so when federal soldiers became active in suppressing the organization he went to central Georgia, where he lived a year or two and returned home to resume his farming. His wife died in 1873, and the following year he married Miss Margaret Lisa Beattie, daughter of John and Harriet Beattie, of Cleveland County. The second Mrs. Jolly lived with her husband 43 years, until her death in 1917.

While in Georgia, Mr. Jolly served as overseer of roads in Butts County for several months, and after his return to this part of the country he was appointed as a deputy by Sheriff B.F. Logan, of Cleveland County, a post which he filled for eight years. After Cherokee county was formed he was a candidate for supervisor in the first elections, and was defeated by only a few votes.

Mr. Jolly always took great interest in public affairs, and he attended many of the general reunions of the Confederate soldiers.

And in the Grassy Pond church cemetery a monument stands for Richard and Margaret. 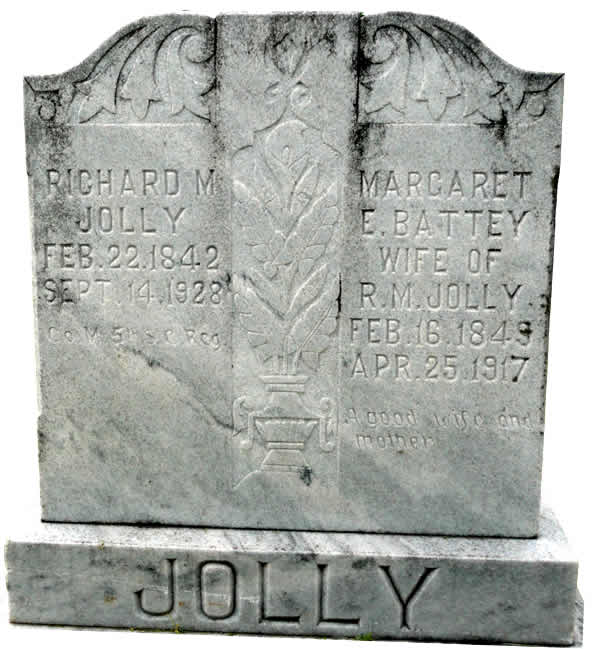 The chapters are in a special PDF format, with the controls at the bottom of the story window. You can also move forward and back through a story with invisible controls on the right and left of the page. (Just hover over the edges of the page and look for the directional arrows.)

You can make the story appear in full screen, and (if your browser is not set to block popups) you can open the story in a regular PDF window for printing or saving.