Joe was a wanderer and something of a scoundrel. He simultaneously produced sets of children with two different women, and kept each family virtually ignorant of the other. His “second” family, with Nancy Luquire, lived in the mountains near Murphy, N. C. (They had five children, all of whom were born prior to their marriage in 1884.)

In 1936, after having been absent from his first family for decades, he turned up at his son Ben’s home in Cleveland County for a visit that lasted a year. Then he was off again, back to the mountains where he died in 1938. (See timeline and more details.)

Joseph married his first wife, Sara Womack (right), in 1868. They too had five children. Sara was the daughter of Willis and Phoebe Greene Womack. She died in 1909.

The oldest child of Joseph and Sara was Lula, born July 31, 1869. Shown here as the young wife of John Hill McDaniel. In 1920 they lived near Ellenboro.
The second child, and oldest son, was John D. (right), born Feb. 4, 1872. John and his wife Zillie spent all their years in the town of Bostic, NC.
There were two other daughters in the family, Bessie and Martha. In this group, Bessie is shown at upper right, standing behind her husband Broadus Hamrick. Beside them is Lula, behind husband John.
A newspaper photo of Bessie as she appears on her 50th wedding anniversary (taken in the late 1940’s). Broadus and Bessie lived in Sandy Run Township of Cleveland County. No photo is available of Martha, the youngest daughter. 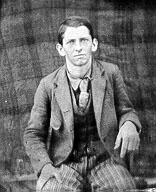 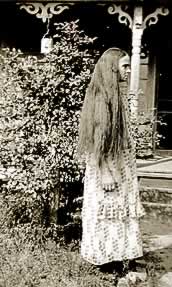 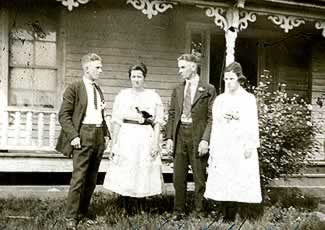 Some ladies in those days grew hip-length hair. Florence was one of them. Ben and Florence farmed the old Monroe Lovelace place on Trinity Church Road in Cleveland county, near Mooresboro. They lived in this old house for many years.

These are their two oldest sons and their wives. From left, Everett Titus and Ruth Rollins Bailey; and Samuel Marvin and Anner Winn Bailey. Taken in the mid 1920’s. (Photos in this sequence were processed by Gilbert’s Studio, Cliffside.) 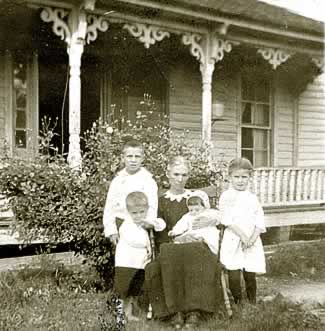 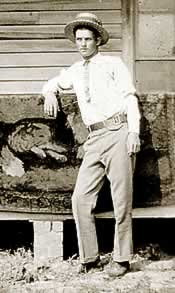 After her husband’s death, Aunt Lula lived at Ben’s and Florence’s for a time. Standing at rear are (from left) Byron Reid and Bertha Gladys. William Gaston is leaning on chair and Edwin Yates is in Aunt Lula’s lap. (Spring 1922)

Son Johnny Forest in the mid 1920s. He was a designer at Cliffside Mills. In 1933 he married Ilene Scruggs. Their only child, Donald, was born shortly after Forest’s tragic accidental death in November 1938.

Ben Bailey was as stubborn as a mule and mean as a snake. For instance, he was inclined to call the cows to the barn in a low voice, then, when they didn’t promptly respond, beat them with a barbed-wire whip he had devised for just that purpose. Grandma, crying and praying, would come running to apply salve to their wounds.

Ben was an interesting man and at times, when the planets were perfectly aligned, was friendly and amusing. He would let his barefoot young grandson, who lived nearby, stand on the back of the little red Farmall as he plowed and harrowed the fields; and ride the wagon on planting day, when sacks of cotton seed and fertilizer (“gue-anner” they called it) were offloaded strategically across the landscape; and show him the little hatchlings in a jar of snake eggs Ben had hung on the sunny side of the corn crib. Someone once gave Ben a wildcat that had been captured in the mountains. He kept it for a while in an outbuilding, but, never figuring out what use it was, eventually got rid of it. He also harbored an occasional hawk he somehow caught, and a burrow of young rabbits he had unearthed in the fields. Ben used colorful language, some even repeatable. He called a porch a “pie-izzer” (piazza?). When he was tired out, he was “pizzlesprung.”

A tall tale circulated about Ben, telling how he once drove over to Lattimore in his buggy. While there, the tale goes, he bought a hound dog from someone, tied it behind the buggy and started back to Mooresboro. Presently a thunderstorm came up. His horse was pretty fast so he decided to outrun the storm. The amazing conclusion: the horse and buggy remained bone dry, but the dog had to swim the rest of the way home.

As a young man, Ben is said to have accidentally driven his car into a ditch, whereupon he walked away and never drove a car again. If he needed to go somewhere reasonably near he would drive his tractor, ride his horse or hitch up the wagon. He abhorred strong drink and anyone who used it (presumably including his father). Nor did he use tobacco, although he took Stanback Headache Powder by the carton.

He did not suffer fools gladly. Once when a peddler knocked on the door and asked to speak to the woman of the house, Ben pronounced himself the “man of the house and bull of the woods,” and ran the fellow off.

He never saw a moving picture, considering them sinful, and, on his death bed in 1950, elicited from Florence a promise never to frequent a movie theater. Thankfully, he did not foresee the coming of television, a medium that, in the years ahead, provided Florence with many days and nights of amusement and delight.

Ben and Florence produced a fine family of ten upstanding, decent sons and daughters (see below). None of them routinely displayed the worst traits of Ben, but were more inclined to base their lives on the saintly qualities of Florence, who, herself, was influenced by the teachings of Jesus—and the fireside chats of FDR.

During the ’30s and ’40s, Florence brought that rare commodity, money, into the household by peddling milk, butter and eggs. She had never learned to drive, so on peddling day she would perch her stiff little hat atop her head and enlist someone, usually the newest daughter-in-law, to drive her over to Cliffside. She had a roster of regular clients that included the John Tinklers, Holloway Whites and many others. With the proceeds from this enterprise she was able to buy rice, cheese, cornflakes and other staples from the “rolling store,” a convenience to rural people provided by John Bell’s of Lattimore.

In the early ’60s, Florence came to Cliffside to live with her son Byron. She had a chair in the sitting room where she could keep an eye on both the TV and the comings and goings at the McKinney Funeral Home next door. Florence kept a death watch, intently scrutinizing the obituary pages in the paper, and listening to the “Obituary Column of the Air” on the radio. She made it her mission to be the first in town to know who had just died. The minute a hearse would leave the McKinney’s yard, Florence would hound her daughter-in-law, Ruby, to “call up there” and find out who it was that had passed away. “Hummph,” Ruby would snort, “I’m not gonna bother them, they’re probably going somewhere to buy gas.”

On a November night in 1963, at age 82, Florence fell and broke her hip. As so often happens to the old and infirm with such an injury, she lived only a few days, most likely succumbing to pneumonia. On November 8, Martha Florence Eldorado Cooper Bailey was buried on a peaceful hillside at her beloved Sandy Run Baptist Church in Mooresboro, beside Ben and their first child, daughter Ramoth, who had died an infant so long ago.

Their son and daughters, and their spouses, are shown below, as photographed on the same date.