A steel platform with a six-room house on top is a far cry from a covered wagon, but Mrs. T. M. Bishop of near Cliffside has taken her place among the pioneers. She was the first woman of the Duke Power Plant community to have her entire home moved from its old location to a new one. A program which has been under way at the plant since last year offers members of the plant community the chance to buy their homes and have them moved to new locations.

Mr. and Mrs. Bishop had already bought a beautiful, tree-covered home site on the Spartanburg highway, before they learned they could buy their home. They had drilled a well and built a garage. The only thing they lacked was a house. When they heard they could buy the home they had been living in, they jumped at the chance.

When the business transactions were completed, the moving men took over. Mrs. Bishop packed nothing, although she did set her dishes in a box inside the house and put the television set on the floor. Her precautions were useLess, though, she found. She had left a pan of water on the cabinet when she left the house, not knowing that when she returned the house and the pan of water would be on the three-mile journey to the home site. When the house was settled on its foundation of jacks and she could get inside, she found that not one drop of water had been spilled and a dish rag was still hanging on its nail.

Moving a six-room house three miles is no everyday occurrence, and Mrs. Bishop reports that the sight of a house mounted on a steel platform and pulled by a truck drew quite an audience.

After a half-day of moving, which included maneuvering the house through an opening in the grove of trees, it was put down on its temporary foundations the last day of June in 1955. When asked what was most inconvenient about moving, Mrs. Bishop replied that the only inconvenience was having to stay out of her home for two days and nights while water pipes and electric lines were being connected.

Although moving a home is a new experience for Mrs. Bishop, she seems quite enthusiastic about it. She had never seen a house moved before, much less moved one, but she says if she had to make the choice again, she would much rather move her entire home than buy another or build one. Her spirit must he contagious, for she is now practically surrounded by other Duke Plant families who have moved their homes. 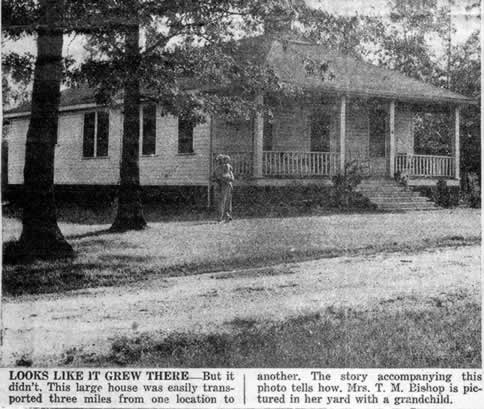 Mrs. Bishop’s home now looks as though it were built in its present location. A worried local minister even asked a neighbor if that home had been there for years, and he had never seen it nor visited its owners. The Bishops have planted grass, a corn patch, a field of alfalfa, and a thriving garden on their five acres. One advantage to the location, Mrs. Bishop says, is that she can plant as many flowers as she likes.

Mr. and Mrs. Bishop will have been associated with the Duke Power Company 33 years in January. Mr. Bishop is now the outside foreman at the plant.

The Duke Plant pioneers have successfully “cleared their brush and planted their land,” and though, unlike the first pioneers, they did not build their home there, they have placed there a home any long-ago or present-day pioneer would be delighted to own.