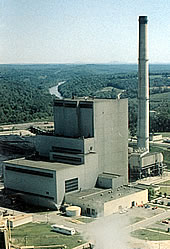 In 1939 a great number of new people came to Cliffside to build and operate what was then a giant power generating plant only three miles southeast of town. They built a village of dozens of homes and brought their families from other Duke Power installations in the Carolinas. The infusion into the community of new people with different backgrounds and outlooks had a very positive effect on Cliffside. It broadened our base of friends and made our lives more interesting. The children and grandchildren of many of those first “Duke Power” families continue to live in and enrich our area, and many of our citizens continue to work at the plant. And now a second wave of new people is going to arrive, as Duke greatly enlarges its Cliffside facility.

Our thanks Jim Cauble for creating a map and a residents list of Duke Village, and to William Wallace and Marty Beam, both Duke employees, and Anita Price Davis, for contributing a series of photos taken over the years at the steam station.

Few of us have ever known anything about that complex operation “over there,” so we’ve scanned an old trade magazine article from 1940 that describes in great detail the workings of the original plant. After reading this, some of you may decide to build your own power station. We also thank Joe McHugh, a retired Duke employee, for providing a roster of the men who manned the station on the very first day of operation.

Footnote: In the ’30s, Duke’s decision on which side of the main Broad River to build their plant was an important one for Cliffside’s growth and economic future. They opted to put it on the far side, away from Cliffside. If they had put the plant on the near side (as Charles H. Haynes had urged), Cliffside Railroad would have had easier access to the plant, and might have—after greatly expanding its operation both in rolling stock and miles of track, a huge investment—secured the contract to provide the plant with coal and other materials. As it turned out, with the steam station on the far side, Cliffside couldn’t, without quickly building a costly trestle, offer them much. And the Clinchfield Railroad, whose line is only seven miles away from the plant to the west—on the “right” side of the river, got the contract and has served Duke all these years. Had Mr. Haynes struck a deal and made a serious commitment then, today there might still be a Cliffside Railroad and all that that implies.