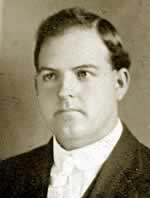 Andrew Carlo Swofford was born in Cleveland County, N. C., on June 27, 1886. He came to Cliffside in the fall of 1909 as pastor of the Methodist church. At that time, as it had since 1902, the congregation gathered in a hall over the store, which was a wooden building standing about where the Cliffside Garage later stood. Simultaneously he was principal of the school. During Rev. Swofford’s tenure the present Methodist church building was planned and erected (the first service held there was June 8, 1912).

In 1913, Rev. Swofford left Cliffside to become pastor of Salem United Methodist Church in Morganton, N. C., remaining there until 1917. By 1922 he was in Winston-Salem; he said as much in his speech at the Memorial Building dedication on June 24.

Address by Rev. A. C. Swofford

Members of the R. R. Haynes family, Ladies and Gentlemen: I did not come from Winston-Salem over here yesterday to make a speech, though I had been invited to make a fifteen minutes address, but I came mostly just to get the spirit of good fellowship again and meet the new friends, and then, most of all to come and mingle with you my memory and my own love and affection for the man we honor tonight.

I will not make a speech but I hope that this creed that I found in Mr. Haynes’ Bible on the day of his funeral will be a great inspiration to many. The Bible had been handed me by members of the family and I termed it “Mr. Haynes’ Business Creed.” I have put it in a scrap book and have quoted it dozens of times in these years and I hope it will be written in letters of gold and framed and hung in the most conspicuous place in that building down yonder, if it has not already been done. He says: “My Business Creed. Written on open Bible 300 miles from home. Sometimes people ask me why I succeeded: that is easy enough to answer. I endeavor to be truthful, honest and pay every cent I owe, always keeping at something, have plenty of energy, do not give up and, most of all, not engage in any thing that I could not go to God and ask him to help me—and I have not since I joined the church —and I have gone to him often for help and found it. I never engage in anything that I do not go to God and ask him to prosper as he saw best; and my advice to all is not to engage in anything in which you are unwilling to ask God’s help.”

I am going to give just a minute or two and I want the Chairman to cough lightly if I speak over my time.

“…if I could see the form of the founder of this town walking down the street with his umbrella across his arm, stopping to pick up a pin, or stopping to admire a flower … my heart would be glad.”

The first elements of this beautiful creed was Truth. What a foundation stone! Character. Now I am a preacher, that is, sort of a preacher, and that is the finest thing in the world just to preach a sermon on—but I have not time for a sermon now, but I want you to notice these foundation stones laid for the character of this fine man. Truth! That was his first foundation stone. There was a preacher here when I was pastor in this town who went down to Mr. Haynes’ office one day and said to Mr. Haynes, “We don’t think you have quite done what you promised us.” Mr. Haynes was a man who believed most of all in truth and honesty and veracity, and his word was never to have even a shadow of doubt cast upon it, and he stopped a moment, as we used to like to see him, with that fire in his eye and turned around to the minister and said, “Well, sir, I will do what I say and if you find I have not, I just want you to tell me wherein I have failed.” And the minister grew a little nervous and [was] rattled for a moment. He was very much upset and came to me about it, thinking because Mr. Haynes and I were good friends that I might help him out of his difficulty. He said to me, “Mr. Haynes will never have anything more to do with me.” But the minister went down one day to talk the matter over with Mr. Haynes and he told me afterwards, “Mr. Haynes was just as nice to me as ever,” and I said, ““You made a mistake. He believed in Truth.” He was honest and paid every cent he owed and in his Bible was found marked some passage of Scripture referring to paying the laborer for his work, passages of scripture were found underscored expressing his own life and his relation to the men that worked for him.

He was industrious, full of energy. I used to think when I saw him working so hard, it does look like Mr. Haynes might rest now—he doesn’t need to work so hard—but if there was any man in the world he had no respect for and hated, it was a lazy man. There were only two lazy men I ever knew who lived in Cliffside, but they could not get by with it. I believe they used to sit around and play checkers but I heard long since that one of them had gone to work and the other must be in Heaven or working one. But Mr. Haynes was industrious, always at work, always something to do and he wanted everybody else to work—and the fact of the business is—I don’t think people can be Christians and not be willing to work. That was one of the foundation stones of his character; he was always holding on and I can say that spirit of holding on in this town and the perseverance you find in this magnificent town is because he held on. That would be another fine theme for a sermon. Some people were very much surprised when it was found out that prayer entered so largely into his life. I asked him one day if he enjoyed religion and he said that I was the first pastor in twenty years that had asked him how he was enjoying religion. It made me feel ashamed. I had enjoyed his generosity, his kindness, his friendship for three years and had never talked about his relationship to God. That was a lesson to me and I have never allowed a rich man or any other man I have come in close contact with without asking him about his relation to God. And when I asked Mr. Haynes that question he talked about how he loved the Lord and how dear his prayer life was to him and how he tried to live right, and he said, “I grow discouraged, but I pray,” and he says, “Sometimes I am lonely and I [go] to God in prayer.” So when I found this [out] I was not surprised. And when I asked him on one occasion while I was Principal of the school if he would not come up and make a little talk he said, “I can’t, I can’t,” but his life ran smooth and deep. And all this we could not know until one day he went to Heaven, and then we saw how much he meant to us and how much his life was [worth] to us, and we found his life ran deep and smooth. This school building here, and this building which has been presented and accepted tonight, were on his mind and the dream of his life, and when he passed away it left the foundation upon which you can continue to build, and a greater Cliffside is here today because he lived back yonder. And it has been a source of great joy to me that the same spirit he left here, that he founded in Cliffside, still abounds. You can come into the town and feel it, and be inspired by it, and rejoice in it, and glory in it. This building that is here I trust will be a great place in the community, in which to instruct and make larger the minds of the citizens of this town. When I was principal of the school here, how happy I would have been if we could have had a building like this. There were four hundred and twenty-five pupils enrolled and we had seven teachers and my office was about four feet square, and now, Mr. Principal, think what you have. But these are days of larger things for you, larger because he started them right to begin with, and still larger as the future opens out and unfolds.

May this building down here mean much to the physical and spiritual life of this community and do much toward the glorification of God.

May I not just close by saying that it would be a happy occasion—and it is in many respects— but if I could see the form of the founder of this town walking down the street with his umbrella across his arm, stopping to pick up a pin, or stopping to admire a flower, or stopping somewhere to speak to a child, and stopping again to look into the face of a workman who was tired with toil and give him a word of comfort and joy, my heart would be glad. After all, I don’t know but what he is nearby. Just here I want to tell you of a woman I once knew who lay dying and I went to see her. She said to me, “Last night I had a dream of the day of my funeral. I could see the casket as they brought it in the room, and I could see the church and it was dark, and then they carried me to my grave and covered me up.” Two or three days later she died and I preached her funeral in the presence of a large number of people, and it just seemed to me as we were going through those last rites that she was there hearing it all. And who knows but in the spirit world his ears are unstopped, his vision is undimmed, and he knows and is glad for this occasion.