Henrietta Man Honored With A Day Of Festivities

HENRIETTA – Although you may not yet be aware of the fact, Saturday [May 27, 1984] is Solon Smart Day in North Carolina.

Yes, Henrietta native Solon Smart has been given his own spot on the state calendar for his contributions to the people of Rutherford County and the state Democratic party. 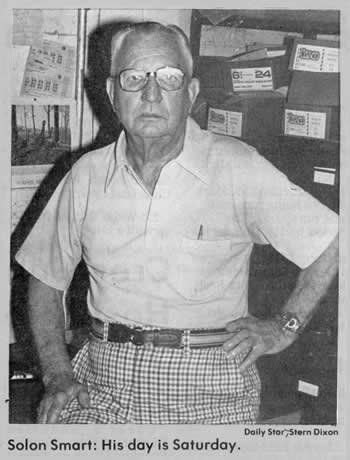 “Solon is well thought of in our county,” says Mooresboro resident Ben Humphries. “He’s one of the kindest people you’d ever meet in your life.”

“So many times we forget to honor someone who has done a lot for us before they’re gone,” Humphries says. “So we thought how nice it would be for him to be recognized now while he’s still here.”

Smart, 75 years old and part-owner of Hawkin’s Hardware in Henrietta, will be the guest of honor Saturday at a shindig at the Snuffy Jenkins Bluegrass Park near Cliffside. Although Humphries, who owns the park, calls the event bi-partisan, the appearance will be one of a great Democratic retreat.

According to Humphries, the list of dignitaries coming on Smart’s behalf is likely to include Gov. Jim Hunt, former governors Bob Scott, Terry Sanford and Dan Moore and several Democratic candidates for the 1984 governor’s race, including Charlotte Mayor Eddie Knox.

Judging from the many stories that have been told about Smart, there are two reasons these political bigwigs will be making the scene in Cliffside this weekend. One is to thank Smart publicly for his invaluable aid to their political careers, and the other is to seek some degree of endorsement – if no more than a wink of the eye or nod of the head.

A political nod from Smart is no small deed if you aspire to the Governor’s Mansion. Since he first took an inkling to politics in the 1940s, Smart has helped three Democratic candidates – Sanford, Scott and Hunt – cross that hallowed threshold. The only blemish on an otherwise enviable record involves his work on the unsuccessful 1972 gubernatorial campaign of Hargrove “Skipper” Bowles.

Politicians consider Smart and his three-of-four odds good company. “If there was a man alive that I might follow politically, it would be Solon,” says Rutherford County resident Chuck McSwain.

“He’s a man who can get the governor on the telephone when you or I wouldn’t get past the secretary,” says Humphries.

Smart was recently elected to another of his many terms as Democratic Party chairman in Rutherford County. He is known throughout the county for his long-time dedication to the political realm, although he has never run for public office and says he never plans to do so.

“But there’s more to him than politics,” says Humphries. “He’s active in the Cliffside Baptist Church and Clemson athletics (his alma mater). And his favorite hobby is cock-fighting.”

Smart attended Clemson during the heart of the Depression, graduating in 1935 with a degree in textiles. From there, he moved to Kannapolis to work for Cannon Mills before being caught by the bombing of Pearl Harbor. After the war, he returned to Rutherford County to open a hardware business with his brother-in-law.

He remained in the U.S. Army Active Reserve until retiring as a lieutenant colonel in 1973.

Smart entered the political game in the ’40s and served several terms as head of the county Democratic party during the ’50s and ’60s. In recent years, he has been elected to the same office twice – most recently a month ago.

Smart says he enjoyed the days of working his fannie off for various political candidates, but that his days as campaign manager are over.

“It takes a young man to do the job … much younger than I am,” he says. “But I’ll support them financially and by word of mouth.”

Smart believes that campaigning has gotten out of hand in the amount of money spent by office-seeking candidates, and that many of the best men and women are excluded from politics because of their lack of money.

“There are a lot more good people out there without money than there are with money,” he says.

As for the 1984 governor’s race, Smart won’t make any predictions or endorse any one candidate.

“I can’t think of a bad candidate,” he says. “Several are personal friends of mine.”

Despite the expense and hard work involved, politics has never lost any of its mystique for Smart. Sometimes, he says, it gets less exciting, but it continues to get more interesting as the years go by.

Smart’s advice to those with political aspirations is simple and succinct.

“Start at the precinct level,” he says. “Attend the meetings. And if you get , elected to an office, serve to the best of your ability. You’ll be noticed. There’s not enough of that going on now.”

CLIFFSIDE – It was a day for sunshine. A day for dancing barefoot in the grass. A day for munching hot dogs and baked beans in the open air.

The 75-year-old hardware dealer reclined in a padded easy chair while a parade of speakers detailed his accomplishments. The festivities were punctuated with Hunt presenting Smart with the Governor’s Award for Excellence and a portrait. 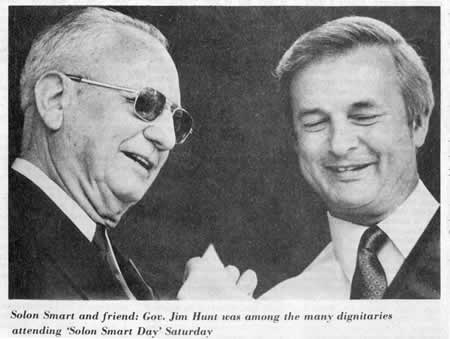 “As I look across North Carolina, I don’t know a better citizen or community leader than Solon Smart,” Hunt said. “And I’m very proud to be here to call Solon Smart a friend.” Hunt made one minor gaffe when he referred to Henrietta, Georgia, but the crowd quickly reminded him it was North Carolina.

Senior Hunt aide Joe Pell told the group that Smart was working for the county. “If you haven’t gotten everything you wanted in Rutherford County it’s not because he’s timid,” Pell said. “He has asked for it, but it’s just not been delivered yet.”

Millionaire Cleveland County filmmaker Earl Owensby recalled as a youth in Cliffside that Smart had let him buy a bicycle and pay him a dollar a week. “When the mill didn’t run good, he helped us all out,” Owensby said.

The ceremonies were interrupted twice by thundering helicopters: once with the late arrival of Charlotte Mayor Eddie Knox and again with the arrival of a chopper that later whisked Hunt and Knox to Charlotte 600 festivities.

Before the ceremonies, Hunt shed his sports jacket and worked the crowd with a handshake for the men and a peck on the cheek for the ladies.

One supporter presented Hunt with bumperstickers that read: “Hunt for common sense in the Senate.” An unofficial candidate for U.S. Senate, Hunt declined to pose with the bumperstickers because he didn’t want to campaign on “Solon’s day.”

But that didn’t stop others. Placards, stickers and posters were as thick as the smoke drifting off the charcoal grills.

Organizer Ben Humphries called the event highly successful, but said the crowd would have been bigger if not for the distractions of a holiday weekend. As it is, Humphries will be eating a lot of potato salad this week.