Rev. Zeno Wall, D.D. was not a native of Cliffside. Indeed he only lived in Cliffside for a few years. But he was the first person ordained by the Cliffside Baptist Church, and there was always among the older citizens the feeling that he “belonged” to Cliffside. Wall went from Cliffside to be one of the most successful and beloved pastors in North Carolina. By 1931, not even half way through his active ministry he had held 120 revivals, performed 175 marriages, baptized 2,431 souls and ordained 52 ministers. He was president of the North Carolina Baptist Convention for three successive years and he served for two years as president of Boiling Springs Junior College (later Gardner Webb University).

He was born August 20, 1882, near High Shoal Baptist Church just north of Cliffside. He was educated at Carolina Heights Academy, the location of which we’ve been unable to discover. In January of 1904 Wall was an assistant depot agent at Caroleen when he accepted a position as bookkeeper for Cliffside Mills.

There is no firm evidence as to whether Wall moved to Cliffside in 1904 or lived near (or perhaps in) his family home at High Shoal. But we believe he moved to Cliffside, for he appears often in the social and civic news of the town. For example, he is mentioned as one of the guests at R. R. Haynes home in August of 1904. By January of 1905 Wall was “Councilor” in the Cliffside Council #139 of the Junior Order of American Mechanics. And when an Odd Fellows lodge was organized at Cliffside in April of 1905, Zeno Wall was elected “Noble Grand.” Finally, in May of 1905 Wall is mentioned as an officer in the Cliffside Red Men.

As an aside, we note that while at Cliffside Wall applied for a job in Greensboro. But unfortunately for him, the person he applied to was a friend of R. R. Haynes. This friend sent a copy of Wall’s letter back to Haynes and asked what he made of it. We don’t know if Haynes spoke with Wall about this, but he replied to his friend that he could only imagine that Wall was thinking of taking a wife, and perhaps the wife-to-be thought Greensboro preferable to Cliffside. Can you imagine?

Actually Mr. Haynes may have been near the truth regarding the possible wife-to-be, for the Rutherford Tribune of August 25, 1904, reported that Mr. Zeno Wall, of Cliffside, and Miss Bettie Melton, of Caroleen, had returned from a week’s visit to the World’s Fair at St. Louis.

Wall was present when the first steps were taken in 1907 toward the construction of the original Cliffside Baptist church building, and he recorded his memory of that event. According to him a group of “great souls” gathered where the church was to be built. They prayed for the new church, and then “Rev. Mr. Stone struck the first stroke with an ax on a pine tree, followed by the late Mr. Raleigh Haynes, then others and others until one tree was down and a start had been made for the erection of the first church in Cliffside.” (Actually, it was the first white church in Cliffside.)

We are told that Wall’s first interest in the ministry was kindled by an invitation to speak at Mt. Pleasant Baptist Church, located between Cliffside and Boiling Springs. On May 30, 1906, he preached his first sermon at Mt. Pleasant. And we note that less than four months later he was either licensed or ordained by Cliffside Baptist. In any event he had begun to feel that his life’s work should be in the church. There is a story, perhaps apocryphal, that when Wall first felt the call to the ministry he disappeared for several days while he hid in someone’s barn–evidently running away as did Jonah in the biblical story. But Wall himself relates that he “tried to drive away the impression, to throw off its power, to get out from under its weight, but it lingered.” He goes on to say that no rest came “until I had taken the president of the corporation (R. R. Haynes) into his private office, told him of my call to preach, my plans for the future, and tendered my resignation.”

It appears Wall left Cliffside and attended Mars Hill College during the 1908-09 and 1909-10 academic terms. But this relies on flimsy evidence. It is known that Wall attended Mars Hill, but for whatever reason Mars Hill seems unable to determine his dates of attendance. Now, in To Higher Ground, a history of High Shoal Baptist Church, we are told that in March of 1908 a special offering was given to Zeno Wall to help with his studies at Boiling Springs High School. (We believe this is in error, for he had already attended high school.) Wall says of himself when he went to Cliffside as bookkeeper, that he had “business training.” Surely that meant a high school education. (It is almost certain that, in To Higher Ground, there is a confusion of the facts, and the offering for Wall was to help with expenses at Mars Hill.)

We know for a fact that Wall attended the Southern Baptist Theological Seminary in Louisville, KY during the 1910-1911 academic year. After leaving the Seminary he took a pastorate at Marshall Baptist Church in Marshall, N.C. There he met and married Ada Katherine Ramsey. From Marshall he went to Mt. Olive Church in Mississippi, and in 1915 he took a pastorate at Columbia Baptist Church in Columbia, Miss. In early 1916 we find Zeno Wall in Clinton, Miss., at the College Church. He must have made a great impression in Clinton for on May 24, 1917, Mississippi College, located in Clinton, awarded him the degree Doctor of Divinity.

Dr. Wall might have remained in Clinton, but along came the World War. In July of 1917 Wall tendered his resignation and announced his appointment as chaplain of the 1st Mississippi Field Artillery.

There follows almost 6 years for which we have no information. He likely left his chaplain’s position shortly after the end of the war. By 1922 he was pastor of the First Baptist Church in Goldsboro. In January of 1925 he refused to accept a raise in pay that was offered there, saying “I am being paid as much as the church can pay.”

Sometime during the year 1925, O. Max Gardner approached Dr. Wall and told him that the First Baptist Church in Shelby was “a sleeping giant” that he (Wall) could awaken. And so he went to Shelby that year, even though an anonymous letter told him that pastors did not stay long at First Baptist in Shelby—which was correct, for the turn over in pastors there had been rapid and often.

But Wall evidently did awaken the sleeping giant, and he served in Shelby until January 1, 1948. During his tenure the membership at First Baptist rose from 600 to 2600. His years at Shelby’s First Baptist were the most productive of his life. He was a driving force in the struggle to keep Boiling Springs Junior College viable, and in its change to Gardner Webb College. In fact he served as interim president of the College from May 5, 1930, until March 23, 1932. He was elected president of the North Carolina Baptist Convention in three successive years, the last of these being in 1934. And in 1933 while attending the Southern Baptist Convention in Washington, D.C., he was appointed to a committee that would call at the White House and present President Roosevelt a resolution congratulating him on “his efforts to relieve the distress of millions of men now without employment.”

Dr. Wall had a great many leadership traits, one being the strength of his speaking and writing. On January 20, 1931, he spoke at the First Baptist Church in Winston-Salem and the Winston-Salem Journal reported that his title might have been “In Praise of Hard Times.” “Ah, but this is a fine hour, a splendid hour, an hour when men are made,” he asserted. One can only imagine that such comments at such a point in history could only be made by an orator of exceptional strength and conviction. Many of his sermons and speeches have been printed, and he published three books with the Broadman Press of Nashville, Tenn. In 1945 he published Heartening Messages; in 1947 Verities of the Gospel; and in 1948 A Day for God-Called Men.

Cliffside always thought of Dr. Wall as a native son, and he stayed in contact with Cliffside throughout his life. On May 24, 1926, he delivered “the Literary Address” for the Cliffside School graduation. He held revivals at Cliffside. And on June 1, 1937, he officiated at the double ceremony in which Margaret Loretta Haynes, daughter of Mr. and Mrs. R. E. Haynes and Hazel Inez Haynes, daughter of Mr. and Mrs. G. C. Haynes were married to their respective spouses. On May 18, 1941, Cliffside Baptist Church completed paying the note on the church building and a formal dedication ceremony took place; Zeno Wall preached the dedication sermon. And in 1944 when D. S. Boyce Bridges died, Zeno Wall was in charge of the funeral.

After leaving First Baptist in Shelby, Dr. Wall moved to Thomasville and became general superintendent of the Baptist Children’s Homes–the Mills Home in Thomasville and the Kennedy Home in Goldsboro. After two and one half years Wall retired and moved back to Shelby. But as it turned out he was not to retire. He was called as supply pastor to Elizabeth Baptist Church in Shelby on November 23, 1952. He intended to stay 5 weeks, but instead he stayed 5 years.

As an indication of the regard in which Zeno Wall was held, we note that when he retired from First Baptist in Shelby, the church presented him with a new home in west Shelby. (When the new Elizabeth Church was dedicated in 1957, the congregation gave him a new Buick.)

(The author is indebted to Jeanne Wall Cole for photos, documents and conversation regarding Zeno Wall.)

Photos of a Young Man 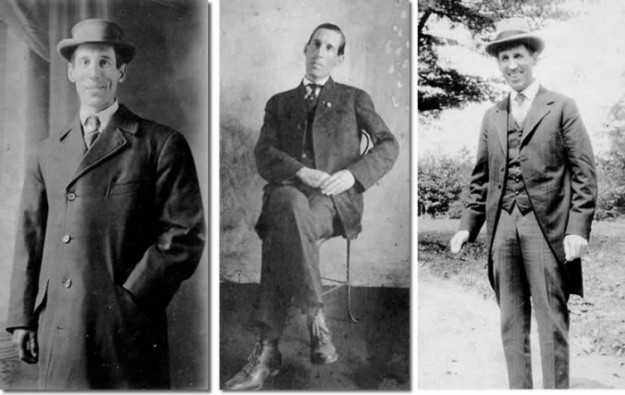 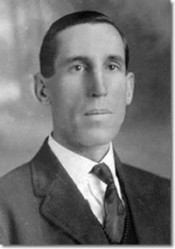 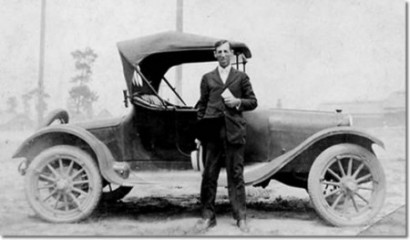