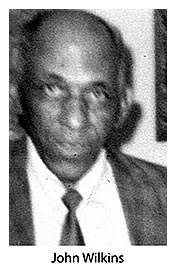 John Matthew Wilkins lived his entire life in the twentieth century, but as one considers his life the image that comes to mind is that of a Biblical patriarch. He fathered eleven children—nine of whom survived infancy, and reared them with a loving but firm, even strict, hand. His children did not so much as think of disobeying him, and the entire community knew his rules and helped him enforce them. Moreover, religion was central to his life. For most of his years he lived, literally, at the back door of the Haynes Grove Baptist Church. He taught an adult Sunday school class there for almost 57 years, and served as deacon in his church for perhaps 50 years. And in addition to that, he believed, as did his family, that the last 20 or 30 years of his life were given him directly by divine intervention

John was born January 6, 1900 in Cowpens, SC (Spartanburg County). He was the next to the youngest of 14 children of Calvin Wilkins (born 1864) and Susan (Wilkins) Wilkins (born 1865). Calvin and Susan were not related; they had the same surname because of the slavery era convention whereby slaves were given the last name of the owner of the plantation on which they lived. Calvin and Susan Wilkins are buried at Mt. Calvary Cemetery in Cowpens.

John put his skills as a plumber to good use in off hours as well as on. In addition to “moonlighting” doing plumbing work for individuals living outside the village, he worked on his own mill village home. When most of the town—and certainly all of the Black community—had to make do by bringing water in from one of the faucets that were located between the village houses, John ran water into his home. And by rigging a water barrel atop his garage and building a shower stall beside the garage he was able —at least in warm weather—to enjoy hot showers at his home before most anyone in town.

In the 1950’s John suffered from emphysema and was so seriously ill that he was admitted to Rutherford Hospital. Eventually came the time when it was predicted that he would not survive the night. But his brother Ed, who was a minister, prayed over his sick bed and John reported feeling an overpowering, miraculous intervention—at which point he began to recover. Years later, in 1962, John was visiting in the same hospital, at the birth of a grandchild, when a Dr. Hyde saw him and said, “Is that you John? I thought you would have been dead for years.”

One of John Wilkins daughters, Mrs. Janella Bowditch, recalls how her father reared his children. He was always home for the noon meal and for dinner, and he never took a bite without first saying grace. The family always ate together, and there was no snacking. It was expected that everyone ate at meal time and at no other time.

Every Saturday time was spent preparing for church on Sunday. Because no one washed, ironed or did other work on Sunday, says Mrs. Bowditch, “in my father’s house.” Mr. Wilkins read scripture to those too young to read, and others were expected to read the Bible and Sunday school lessons themselves. There were questions asked of the children to be sure they had prepared for Sunday school, and each child had to memorize a Bible verse and recite it at Sunday breakfast. And, as John M. reminded Fred, the youngest boy, it was not sufficient to say “Jesus wept”.

John Wilkins served the Haynes Grove Church through teaching a Sunday school class and working as a deacon. But more, he—along with others in the church—dug the basement and the baptismal pool which was located at the back of the church. And this work was done in evening after a full day of work had been completed for Cliffside Mills.

Janella recalls that the two older children, Alphonso and Ruth, were baptized in the Roller Mill creek before the baptismal pool was built. Later she recalls the Wilkins children preparing the pool for baptisms by sweeping out the pine needles and filling the pool with water—not too deep, for Rev, Bonner was a short man. And she remembers her father standing in the pool at the base of the entry steps to help out with baptisms.

John M. Wilkins died August 17, 1981 in Avondale, of generalized arteriosclerosis, severe emphysema, and metastasis—carcinoma of the prostate. He is buried in Haynes Grove Cemetery in Cliffside.

This article first appeared in the Spring 2009 issue of The Cliffside Chimes, newsletter of the Cliffside Historical Society.