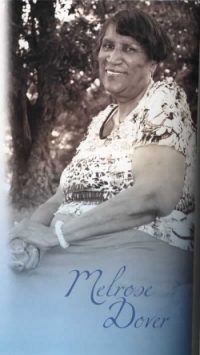 Some people are just hard to ignore. Their personality is a beacon of light that others are drawn to like moths to the flame. According to Chase High teacher, Lynette Dover, her mother-in-law falls into a special category of one-namers. “You know, like Prince or Madonna? The name, Melrose, speaks for itself! People that have met her, don’t forget her!”

Born in 1940 and raised in the part of Henrietta known as Peppertown; Melrose Dover is no stranger to hard work. At 71, she starts her day throughout the week at four in the morning, to get ready for her son-in-law to pick her up at five, so he can drop her off at the Country Plaza Café in Cliffside. Always there by six a.m., she starts her day by preparing the food that will be served on the hot bar for lunch.

While there is no sign that marks the location of the Country Plaza Café, it doesn’t seem to matter. The locals down in Henrietta and Cliffside buzz in and out of there making the Cafe a hot spot of local activity. No doubt if you’re hot and hungry, and needing some attention while you grab a bite to eat, then you can count on getting it from Melrose. She may not know your name, but it won’t matter.

“We get men in here all the time that are away from home, doing some sort of work. They can come in, and say, ‘Melrose, what’d you fix today?’ and they can count on me to talk and carry on with them. It always pays in the long run just to be yourself.” It’s entertaining just to watch her interact with her customers. She doesn’t hold back her thoughts or feelings just because she doesn’t know you by name. If she thinks you are out of line, then she tells you. If you need an ear, she has one. Melrose is one of those rare women who shows a genuine interest in what others have going on, and before you know it, you aren’t strangers anymore.”

Down in Cliffside, you can ask anyone,”Do you know Melrose Dover?” and the answer is always the same.”Who doesn’t know Melrose?”A lot of folks will also tack on,”and, oh, how she can cook!” Melrose has worked at the Café on and off since 1986. She has cooked at several other locations in the county, always leaving her mark. The fact that she has never had a driver’s license has not hindered her from working.

Melrose developed her skills as a domestic diva out of necessity, learning to cook from her grandmamma. Her reputation as a cook and a housekeeper precede her. “I love to cook and clean,” she all but hollered.

I wanted to know more about her roots, so I asked about the type of work her parents did. “My Momma took in the washing of several white families on Sunday evening. Me and my four sisters would help her. We started early on Monday morning. We would scrub the clothes on a washboard, rinse them, put them in a pot and boil them with starch, rinse them again, and then have to iron them! And not with an electric iron. We used the kind you laid on a hot stove, but we never burned anyone’s clothes,” she laughed. “When we weren’t doing that, we were picking cotton or other crops. We went out to Lawndale, Campobello, or Hog Pen Branch. We’d pick cotton, so we could buy new clothes to go to the Shelby Fair!”

However, working to help her family wasn’t the same as getting her first job, working as a babysitter for another family. “I would make $12 a week! And, then I gave half of it to my Momma.” One of the families that Melrose worked for was the family of Helen Hardin. Helen was three years older than Melrose. I asked Helen’s daughter, Ann Haynes, about their relationship, and this is what she had to say: 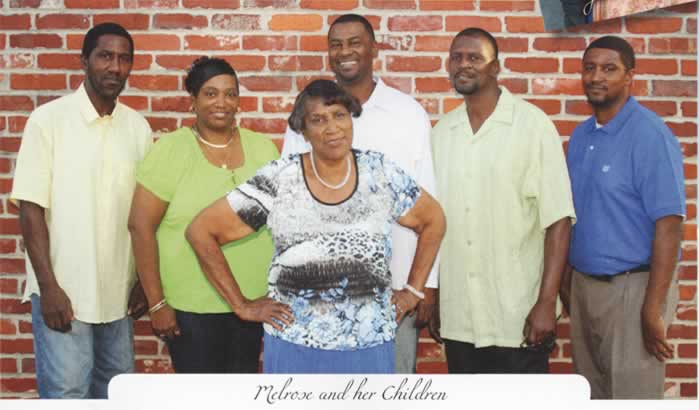 “My mother and Melrose were close. Melrose was the only black dot in our crowd, but it didn’t matter, because they were so close; they were more like sisters than anything else. Melrose came to our house every other Saturday for heavy cleaning. She was part of every milestone that my family experienced. When Mother became ill, and knew that she was going to be leaving this Earth, it was Melrose that she wanted to come take care of her during her final days.”

“Melrose has always had to make her own way in this world,” Ann adds. “She has worked hard to take care of herself and her family. She is the kind of woman that has made a difference in the lives of those around her.”

Coming from a large family, and being such an integral part of other families, undoubtedly prepared Melrose for starting her own family at such a young age. Melrose raised seven children… five boys and two girls…Sharon, Steven, Jeffery, Keith, Derrick, Tammy, and Tavon.

Her great love was Crawley “June” Dover, Jr. They were married 42 years until he passed away.

June met Melrose while visiting his sister out in Peppertown, who happened to be Melrose’s good friend and neighbor. “My girlfriend told me that June wanted to come and see me. And I asked her, why? And she said because he like the way I walked! I thought I was so cool!” she laughed.

They say opposites attract. That must have been the case of Melrose and June. Melrose described her late husband as being a quiet and humble man. They raised their children together, showing them all of the love and attention that they could give them. “If you’re a Dover, then you have to play ball,” cried Melrose’s daughter-in-law, Lynette. “They all played ball. Even the girls, and that was before there were girls’ teams.”

June worked at the Cliffside Mill, but when he was off of work, he was helping to coach his kids’ baseball/little league teams. “He never hollered at those kids. He would even go out, and collect the ones that didn’t have rides to the field,” remembers Melrose. While June was the quiet and patient one, Melrose was the loudest and most exuberant cheerleader in the stands. Referees and umpires cringed at her presence. Cheerleaders were put to shame in comparison with her. Heaven forbid that someone make a bad call out there on the field. All the other parents and spectators knew that Melrose was going to put up a fuss about it. “It was all in good fun,” she said. “I just wish that I had those games recorded, so that I could still sit and watch them now I was so loud, that June wouldn’t even sit with me in the stands.”

So, what can we say about the infamous Melrose Dover? Her laughter is contagious. Her moral compass will keep you on the straight and narrow. Her work ethic puts most of those around her to shame. She is rich in love and in family. Never fearful of what others may think, Melrose is happy just being herself!