Happily this article was written upon Jim Goode’s retirement from Cone Mills. The history of a man, if told at all, is more often saved for his obituary. Mr. Goode was a legend at Cliffside, having gone to work at the age of 12 and serving over half a century. Good fortune continued to smile on him, for he lived another twenty years after retirement. He died on January 27, 1975.

From The Forest City Courier, circa 1955
By Raleigh R. Biggerstaff 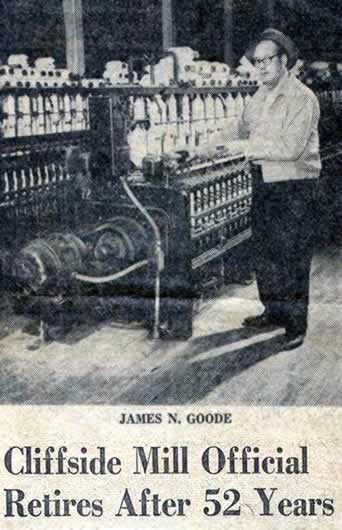 James Nun Goode, master mechanic for the Cone Corporation at their Cliffside plant, retired recently after having worked for Cliffside Mills, which later became the Cliffside Branch of the Cone Organization, for 52 years.

Mr. Goode, who is called “Mr. Jim” or “Cap’n Goode,” by his many friends, was born Feb. 17, 1890, in the Ferry community of Rutherford County. He attended school at the the Old Ferry Community School near his home. His parents were the late G. S. and Elizabeth Goode, who first moved with their children to Cliffside March 17, 1902, while the Cliffside plant was being constructed.

Mr. Goode went to work soon after his family moved to the Cliffside community. His first job was hauling rocks to build the power dam. This job paid 25 cents per day. Later he carried water to the workers in the quarry and when the plant started operation, he began working in the spinning room.

He became a section hand and fixer until July, 1911, at which time he transferred to the machine shop as a machinist. This work consisted of repairing broken parts of machinery and doing general repair work of all types in and around the plant.

In October, 1918, he was transferred as master mechanic to the Avondale branch of the Haynes Company which was being constructed. He helped to complete this plant, install of the machinery and start operations; there were 32 employees under his supervision. And expansion program at the Cliffside plant in 1925 kept Mr. Goode and his men traveling back and forth between the two plants, keeping operations going at Avondale, and installing bleaching and finishing machinery at Cliffside.

After the retirement in 1934 of C.C. Blanton who had been master mechanic at Cliffside Mills, Mr. Goode returned to Cliffside as his replacement. This job he held until his retirement.

[Mr. Goode says] his 52 years of faithful and diligent service were inspired by Raleigh Rutherford Haynes, who helped found the Florence Mill, the Caroleen Mill, the Haynes Mill in Avondale, and the Cliffside Mill.

As Mr. Goode says, “It has been a privilege and an inspiration for me to have been associated with Mr. Raleigh Haynes and the organization he helped found. In my mind, he was one of the greatest men Rutherford County and North Carolina has produced. There are few people in Rutherford county who have not benefited either directly or indirectly from the good works of this man. He was interested in people and oftentimes would sit down with his employees and talk. From our conversations came good, sound advice, which has helped me through many difficult times.”

Mr. Goode is planning to move to his farm, which is five miles south of Cliffside. His activities are going to be gardening, raising chickens, and fruit.

Raleigh R. Biggerstaff , author of this piece, who himself deserves such a write-up, was a teacher and historian. He was the son of Broadus Franklin (“Pick”) and Kate Goode Biggerstaff, and a nephew of Jim Goode. Born on June 6, 1924, Raleigh died on January 6, 1993. Go here to see a striking portrait of Raleigh that hangs in the library of Isothermal Community College at Spindale.