Hollis M. Owens, Sr., who retired Friday after more than 40 years with Cliffside Mills, seems to be ponder­ing what to do in extra time that has suddenly become his. (Dunagan Photo)

Politics and music is an unusual combination, but these two interests will occupy the leisure time of a Cliffside textile official following his retirement this month.

Hollis M. Owens, Sr. retired De­cember 1st as an official at the Cone Mill plants in Cliffside and Avondale after more than 40 years employment with the organization. He began work with Cliffside Mills and Cliffside Railroad in 1921, serving as bookkeeper, cashier, and secretary of the mill.

At the time of his retirement he was traffic manager of the Cliffside divisions and in charge of the commercial properties of both the Cliffside and Haynes (Avondale) plants.

One of his first loves was railroading, and Mr. Owens will remain with the Cliffside Railroad as secretary-treasurer.

Born on a farm near Rutherfordton August 8, 1896, Hollis Owens attended school at Rutherford College, N. C. and in 1917, enlisted in the U. S. Air Corps, serving with the 801st Aero Squadron at Issoudon, France.

The Owens have three sons, Hollis, Jr., an attorney in Rutherfordton, currently serving as Rutherford county’s representative to the North Carolina General Assembly; Andrew, a graduate of Annapolis and now a Lieutenant Commander in the Regular U. S. Navy stationed in Hawaii; and Dr. Charles Owens, a specialist located in Hartsville, S. C.

Upon his retirement, he was presented a beautiful gold watch by the Cone Mills employees.

“You might say I’m the final leaf at the top of the tree,” Mr. Owens said in reference to his retirement from Cliffside. “I’m the oldest employee in the management end at the plant, and if I’m not mistaken, the oldest in point of service.”

“Am I ready for retirement? No, I’ve thought a little about it, but regardless of how many plans you make, you’re never ready.”

Owens indicated that until he makes a decision about the future, he’ll still have his music and politics, that rare combination that has added a certain spark to the personality of a man who has a big hand in making his community and his county a better place in which to live.

Miss Wytle Bridges wrote a poem and dedicated if to Mr. Owens on the day of his retirement. This is that poem:

In 1920 you came to work in our little town,
A young man who wore a smile instead of a frown.
You began your work in Cliffside Mills Company Store,
Then to the Mill Office and Railroad Company – Need we say more?
From that time on through all the days,
Your friends remember you as worthy of their highest praise.
The humor and friendliness you had for folks each day,
Made them keenly interested in what you had to say.
For forty-one years as folks will tell,
You’ve labored long and labor­ed well,
Through all these years you’ve done your best,
And now you’ve earned a nice, long rest.
A finer gentleman the world cannot behold,
A tribute which is worth more than silver or gold.
Though retirement has come for you at last,
We will never forget your good works of the past.
‘Tis true that all our words can­not reveal,
Our thoughts of you and the way we feel.
So we’ll just say we’ll miss you, too,
And to prove it, here’s a gift especially for you. 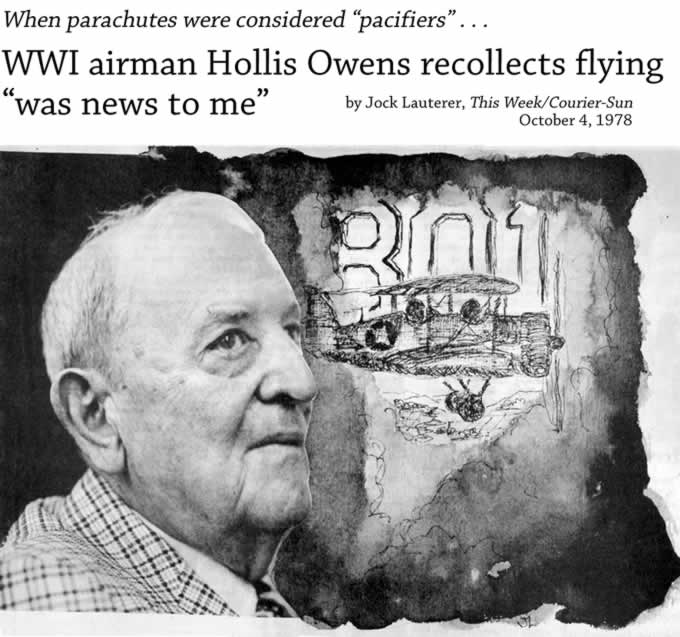 He can just see it again now — the gangly country boy climbing awkwardly into the Neuport two-seater. The boy: all eyes and goshes clambering into the two-winged fighter-trainer Somewhere In France.

“It was my first time in a plane,” Hollis Owens, Sr., of Avondale reflected with a wan smile. “I wasn’t scared — but I was excited, yessir, excited…I don’t recall having a parachute — they didn’t want to pacify a fellow with one of those things back then…”

The year was 1918 and Hollis Owens, Sr. was a mechanic in World War I with the fledgling Army Air Corps. The battle front in France was a long way from his hometown near Henrietta.

That initiation ride in the strange aircraft is etched in the 82-year-old man’s mind. “That was about the first time I’d ever seen a plane…” he admitted.

“I told the lieutenant I’d never been in an airplane before… He said, ‘get in the plane’… The plane took off down the runway and took to the air…

“Well it was news to me,” the old man chuckled.

“We got up to 1,000 feet I guess — and the lieutenant threw that thing into a nose dive — and then he looked back to see how I was doin’. Well sir, I was really stirred up ’cause I thought we were going to hit the ground, but that was just his way of training me, for he pulled the nose up in time…” Owens laughed at himself.

At the age of 21, Owens had left his job in 1917 at the Cliffside company store, and journeyed to Rutherfordton to enlist in the regular army, being shuttled about from Gastonia to Greenville, S. C. and finally shipped to France where he was assigned to the 801st Air Squadron and later transferred to a large air field. “I’d never even been out of Rutherford County until that time,” he said.

Owens recalled, “I met my lieutenant and I saluted. I had learned to salute pretty well by that time. The lieutenant said to me, ‘you need not salute me from now on — just learn how to crank an airplane…’

Owens did just that. After several weeks of intensive training he learned the ins and outs of his aircraft. Part of his duties also consisted of flying daily with his pilot, who was an instructor teaching other would-be fighter pilots.

The only threat of combat Owens’ outfit experienced was an aborted raid by German aircraft. Understandably, the old man said, “We weren’t too far from the front, so I was glad to hear the war was over. We continued our duties in the field until we were sent home — which we did with great pleasure…”

Hollis Owens Sr. came home to Rutherford County and farmed for a time, then took a job at the Henrietta mills store in Caroleen, and finally found his niche at the office of Cliffside mill where he also became agent of the Cliffside railroad.

He’s flown a couple of times since then, saying of commercial airliners, “They’re civilized”… and a chuckle recalling days of leather helmets and goggles in the old open-cockpit Neuport, “You had to duck your head down to get out of the wind…”

Again the wan soft smile. “All that is as I recall it.” Hollis Owens, Sr. let the nostalgia wash over him “…but I would like to see that old airfield just one more time… “