Grover’s younger years were spent in Ferry, until his mother died on February 2, 1890 when he was 5 1/2 years old. His father, being left with eight children to raise, soon married Litia C. Kelly, a school teacher. The family then moved to Charlotte where the children could be exposed to better schooling, but then moved back to Ferry where “Miss Litia” died on November 3, 1892 when Grover was 8 years old.

His father then moved the family back to Charlotte again where Grover attended school at Baird’s Military Academy along with his three brothers. The four sisters attended Miss Kate Shipp’s Seminary School. Then, his father moved the family back to Henrietta where he built a home in which he and the children lived until the early 1900’s when he built his last home in Cliffside.
Grover then attended, and graduated, from Guilford College. He married Ina Fortune on December 30, 1910 and they lived at Cliffside where their first child, Hazel, was born on December 6, 1911.

Around 1913, when Hazel was about two years old, Grover moved his family to Atlanta and enrolled in the Atlanta Dental College and obtained his license to practice dentistry. Afterward he practiced dentistry in Cliffside until his father’s death on February 6, 1917.

He then quit his dental practice to work for his older brother, Charles, at various jobs with Cliffside Mills. He was construction superintendent for the Cliffside Baptist Church construction around 1924.

After his son Grover, Jr. was born prematurely and sickly, on May 13, 1924, Grover, on his doctor’s advice to move to a warmer climate, moved his family to Florida. He invested his inheritance from his father in orange groves. When the depression hit in 1929, he lost everything and moved his family back to the Cliffside area, and finally into Cliffside, in about 1931.

Along with his brother, Walter, Grover ran the Hodge Oil Co. for a number of years, and later was a fertilizer and agricultural product distributor until his death on March 1, 1950 at age 66.

Grover’s life was built around loving and caring for his family. His love, and hobby, was growing large gardens, fruit trees and anything the earth would let him produce.

Ina was born on November 28, 1888, in the Sunshine area of northern Rutherford County, to Brunhilda Hollifield (born July 14, 1856) and Drury Dobbins Fortune (born November 19, 1859). She had one sister and three brothers. The sister and two of the brothers were older. Ina spent her early years at their farm home near Sunshine. Her mother died on November 2, 1898 when Ina was 10 years old.

About two years later, her father married Johnnie L. McFarland (known as Miss Johnnie) and produced twins from the marriage, which would be Ina’s half brother and sister. Miss Johnnie help raise Ina, and her younger brother Victor, to adulthood.

Around 1904 her father took a position with the Cliffside Mill, and the family moved to Cliffside.

She met Grover at Cliffside, and they were married on December 30, 1910 when Ina was 22 years old. Ina’s life at Cliffside was one of caring for her family and others. She was active in the Baptist Church, organized and attended social affairs at Cliffside, was a very prolific writer with regular articles in the local papers. She wrote many letters to family members and others. She became the Cliffside Postmistress during the World War II years. After Grover’s death, Ina authored the book “Raleigh Rutherford Haynes 1851- 1917” on the history and accomplishments of her father-in-law.

For the 13 years after Grover’s death, and prior to her own death on December 20, 1963 at age 74, she lived with her daughter and son-in-law, Hazel and Paul Bridges. Her daughter-in-law, June Haynes, commented several times that no one could have had a better mother-in-law than she. Such a beautiful and accomplished lady she was. One other note—she never took time to learn to drive a car.

Johnnie Long McFarland’s birth and death dates are unknown, as are her parents.

Authors note: Many thanks to Janice Bridges Swing, Anne & Paula Cargill and June Haynes for their help in supplying dates and information 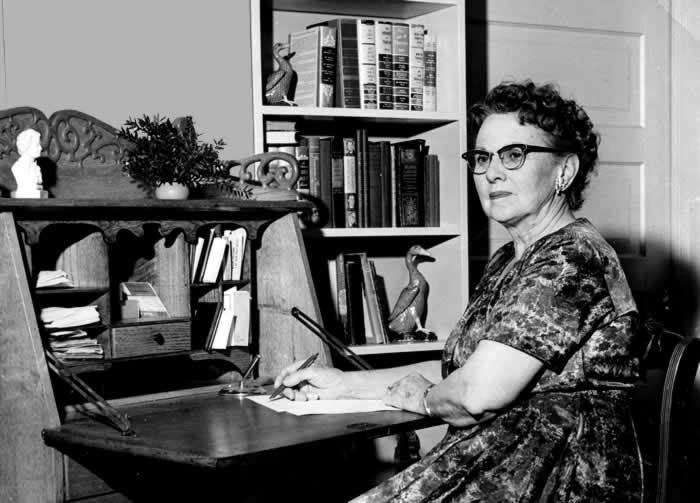 Seated at the desk which belonged to the late R. R. Haynes, her father-in-law, is most becoming to Mrs. Grover C. Haynes, Sr. of Cliffside. Writing is one of her choice hobbies, and she spends much of her spare time at this desk. Her friends cherish the beautiful, encouraging letters and notes that she writes to them quite frequently, and this list of friends extends through many states. For a number of years she has from time to time written newspaper articles entitled, “Charm of Small Towns.” These are always clever, typical and enjoyable. Her major accomplishment in writing is a work in biography entitled, “Raleigh Rutherford Haynes.” Twenty-five hundred copies of this book have been published. Through the benevolence and generosity of Mrs. Haynes’ brother-in-law, the late Charles H. Haynes, hundreds of these books have been given to relatives and friends of the Haynes family. Not only does this book give the life of R. R. Haynes, but in it is interwoven the founding and history of the town of Cliffside.

Mrs. Haynes is the former Ina Fortune, daughter of the late Mr. and Mrs. D. D. Fortune, lifetime residents of Rutherford County. Her family moved to Cliffside in 1902. After finishing the graded school in Cliffside she attended Mars Hill college. In 1910 she was married to Grover Cleveland Haynes, the youngest son of R. R. Haynes. Two children were born to the couple. The older, a daughter, Hazel, now Mrs. H. Paul Bridges of Cliffside, and the younger, a son, Grover C. Haynes, Jr. of Asheville.

For about ten years, Mr. and Mrs. Haynes lived in Winter Haven, Florida. In 1933 they returned to Cliffside to make their home. Since Mr. Haynes death in 1950, Mrs. Haynes has lived with her daughter and son-in-law and grand-daughter, Mr. and Mrs. H. Paul Bridges and Janice. Fate has seemed to play a big part in her life, because now she and the Paul Bridges are living in the lovely, ancestral Haynes home. This home was built about 60 years ago, and still retains much of its original architecture.

Having already lived her alloted span of years makes such a little difference in Mrs. Haynes’ charm, attractiveness, activities and interests. She attends her church meeting regularly, takes daily walks, regardless of the weather, is always trying new recipes and keeps alert on all current news and events. She enjoys making trips, and is always ready for any outings such as picnics, mountain trips and the annual vacations to the beach. The people of Cliffside hold Mrs. Haynes in the very highest esteem. These words would sum up their opinion of her, “She is the epitome of growing old gracefully.”