In the 1950s, before I was an official teenager, my trips to Dr. J. C. Mills’ Drug Store were usually limited to an ice cream cone or cherry coke and the obligatory perusing of the latest additions to the revolving comic book stand that usually featured an array of superheroes, Walt Disney and Looney Tunes characters, Archie comics, etc.  After school the “Big Kids” usually settled into the booths.  Boys discovering girls did not interest me at this time, but new persons entering my environment always peaked my curiosity.

One afternoon such an individual appeared, working behind the store and pharmacy counters. He was short of stature, balding, slightly portly and at my age, I considered him to be an old man, although he was probably in his late fifties or early sixties.

Later that evening, I asked my dad who was the new man working behind the counters in the Drug Store. He explained to me that it was probably Dr. Mills’ brother Commodore Mills who was probably helping out for the afternoon. The name Commodore did not seem extraordinary to me, in that my father’s adoptive parents had both an Admiral Dewey and a Commodore Perry in their family history (much like the given name of Doctor, General, etc.). My father was careful to explain to me that Commodore Mills was a real U.S. Navy Commodore who had a distinguished naval career, had served in the North Carolina Legislature, and was now living in semi-retirement in Rutherfordton.

My curiosity satisfied, I would see the Commodore several times in the next few years, as he periodically would “help out” in his brother’s business. From a child’s prospective I considered him be somewhat gruff and direct, I would later learn this personality was referred to as a “military bearing,” and was forged by years of the responsibility of command. 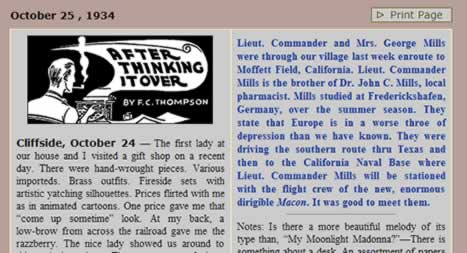 Those memories were dormant until I ran across a listing of the Historical Papers of the George Henry Mills Collection that were donated by his daughter Georgia to the National Air and Space Museum of the Smithsonian Institute in 1996. The outlines of these materials and other information of Commodore Mills reveal an illustrious career highlighted by an adventure into the realm of the post World War I aviation, from the large rigid airships like the Graph Zeppelin, Hindenburg and the USS Macon, to the United States coastal defense and submarine reconnaissance by the non-rigid patrols of World War II.

In F.C. Thomson’s Courier column of Oct. 25, 1934, (left) this reference to George Mills appeared. Actually, there is a much more to the man than the item suggests.

Lt. Commander George H. Mills had been sent on temporary duty to Friedrichshafen, Germany, at the facilities of the Zeppelin Company, a manufacturer of dirigible airships. On May 15, 1934 he was ordered to Germany for the purpose of observing the trans-oceanic trips of the Zeppelin Company’s Graf Zeppelin from Germany to South America. This was in keeping with the repatriation agreements of World War I. During this assignment he made three round-trips to South America as an official observer of the U. S. Navy.

On August 9, Lt. Commander Mills was reassigned to the Naval Air Station Lakehurst in New Jersey as the operations officer. Two months later, October 14th, he was assigned to Naval Air Station Sunnyvale (later Moffett Field), California, as a tactical officer, pilot and navigation watch on the USS Macon.

Lt. Commander Mills remained on duty on the Macon at its home base at Sunnyvale. Ninety days later in February of 1935 the Macon was on maneuvers as part of the Pacific Fleet. Returning to its base the airship was caught in a violent storm and crashed off shore near Point Sur, California. The accident was the last of a series of Navy airship catastrophes, with the fewest casualties (two). 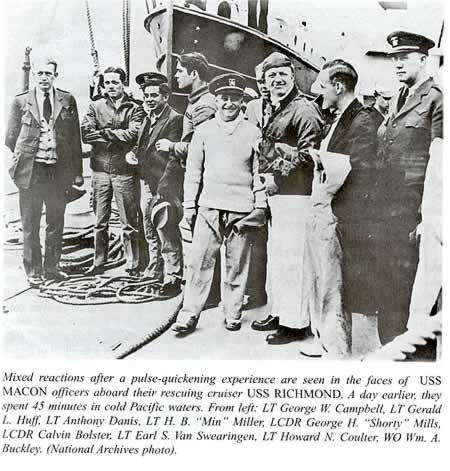 The 81 survivors of the crash were picked up by ships that were also returning from maneuvers, specifically the USS Richmond. Lt. Commander Mills was among the survivors. (He’s marked with an “X” in the photo at left.) The crash and loss of the USS Macon effectively ended the US Navy’s involvement with the giant rigid airships, leaving Germany’s Zeppelin Company alone in this pursuit.

Lt. Commander Mills’ involvement with rigid airships did not end with the crash of the Macon. In August of 1936 he again was assigned temporary duty as an observer on test flights of the Hindenburg on round-trip flights between Lakehurst, N.J., and Frankfort, Germany. 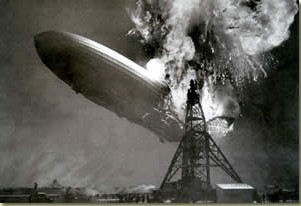 On May 6, 1937, the infamous crash of the Hindenburg at Lakehurst (right) ended the era of the giant rigid airships, although Germany had two other ships, the Graf Zeppelin and the Graf Zeppelin II that continued to operate on a limited basis.

With the advent of World War II, the great giants of the air were soon relegated to the scrap yard. Although Lt. Commander Mills had previously served at Lakehurst, at the time of the crash of the Hindenburg his duty station was at Newport News, Virginia, for the fitting out of the USS Yorktown (CV-5), a carrier that was later sunk in the Pacific in the Battle of Midway in June 1942.

In June of 1939 he was again assigned to Lakehurst as executive officer and promoted to Commander, and on January 15, 1940 he was appointed the commanding officer of Naval Air Station Lakehurst. As such, he was recognized as one of the few airship specialists. Although the Navy had abandoned rigid airships, it still used non-rigid craft more commonly known as “blimps.” These were used for reconnaissance for both the Atlantic and Pacific fleets.

In the brief time before the United States’ direct involvement in the war, and because of his specialized knowledge, he was assigned temporary duty at the Airship Board in Washington, D. C. On January 2, 1942 he was appointed Commander, Fleet Airship Wing 30, a command which included all airships from Canada to Brazil on the eastern seaboard and also included ships in the Caribbean and Mediterranean, and all the airships of the Atlantic Fleet.

In November of 1943 he was promoted to re-instituted rank of Commodore of the United States Navy. The command had the responsibility of not only reconnaissance, but sea patrols for submarine spotting and escorting ship convoys crossing the Atlantic.

The command of the group was wisely placed in the competent hands of Captain George H. Mills, who had commanded Lakehurst since January of 1940, and had masterminded the farseeing do it yourself efforts to get blimps and their crews ready for wartime work. Shorty Mills was also a survivor of the rigid airship Macon, and brought the excellent qualifications of an experienced seagoing officer as well. Subsequently he moved up to command of the Fleet Airship Atlantic, with the rank of Commodore. His leadership in the Fleet airship organization was both efficient and inspiring, particularly in those dark days when U-boats ran rampant along our eastern seaboard and Mills had so little to work with. 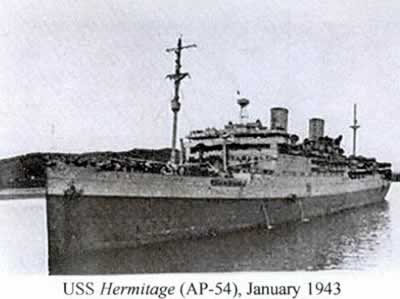 In July of 1945, the hostilities in the Atlantic theatre had greatly decreased and offered little threat to United States security. Commodore Mills, pursued the dream of every midshipman and applied for and received the command of his own ship, and in doing so was required to step down from the rank of Commodore to that of a Captain. His new command was the USS Hermitage, a former Italian luxury liner interned by the US Navy in the Panama Zone.

For the rest of the war Captain Mills’ duty consisted of ferrying returning troops from Europe and later from the Pacific. In July of 1945, he was awarded the Legion of Merit for distinguished meritorious services.

In 1946, he was appointed commander of Naval Air Station, Moffett Field (formerly Sunnyvale), California, and served in that capacity until appointed chief of the Naval Airship and Experimentation Command (CNATE).

After the war, the Navy would eventually begin phasing out blimp airships; although they would remain on in some form into the early 1960s. With the adaptation of the helicopter for military service their days began to wane. Sensing this future movement, Captain George H. Mills, Annapolis graduate and veteran of two world wars, retired from United States Navy on June 30, 1949 and was retired at the rank of Commodore.

After thirty years service, he retired to Holly Hill, his family’s home on Rutherfordton’s Main Street. While others adorned their homes with signs reflecting their architectural or monolithic features, Commodore Mills erected a small but poignant sign at his home in Rutherfordton, which simply read “Dunblimpin.” Commodore Mills holds the distinction of being the highest ranking naval officer from Rutherford County.

Upon his return to Rutherford County, Commodore Mills chose to become active in community service and politics. In 1950, he was elected and served one term as a member of the North Carolina Legislature from 1950 to 1952. He continued to live in Rutherfordton for nineteen years until 1968, when, in ill health, he moved his residency to the University Nursing Home which is near the Bethesda Naval Hospital in Maryland.

George Henry Mills died on October 24, 1975 and was buried in the Arlington National Cemetery. His papers, collections and mementos were donated to the Smithsonian’s National Air and Space Museum and the Navy Lakehurst Historical Society.

George Mills attended local Rutherford County Schools and the Bingham School in Asheville, N.C. He secured an appointment to the United States Naval Academy in Annapolis, Maryland in 1914, receiving his commission in June, 1918. In 1932 he completed his LTA training and was designated as a Naval Aviator, Lighter-Than-Air, #3925.

He was the second son of John C. Mills, Sr. and Nora Poole Mills of Rutherfordton. His sister was Mary Mills Robinson. His brothers were Frank Coxe Mills and John C. Mills, Jr., the latter being “our” Dr. Mills, who operated the Mills Drug Store in Cliffside.