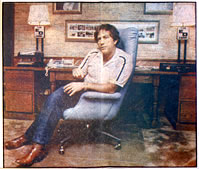 SHELBY, N.C. — Earl Owensby grew up in the hills of North Carolina and has not ever really left — not even to make a fortune in the industrial supply business or to start a film studio.

A film studio? In the hills of North Carolina? Sounds preposterous, but it’s true.

Nestled on a little country road somewhere between Boiling Springs and Shelby lies the EO Corp., a multimillion-dollar film organization that Owensby started in 1973. In the years since, he has made 20 films and starred in 12 of them. He will add another this summer with “Hot Heir,” portions of which will be filmed in Greenville, S.C., during the July 3-5 Freedom Weekend Aloft.

His penchant for casting himself in the lead roles of most of his films has caused some people to describe the 46-year-old Owensby as having a giant-sized ego.

And this claim is enhanced by the 40-by-60-inch pictures of Owensby, the movie star, that line the walls of the corporate complex where the Owensby films are made.

But it is Owensby, the businessman, or Owensby, the country boy, that one finds sitting amid the contemporary decor of the main office, Owensby’s haven.

“Ego converts to a word called pride,” says Owensby, a soft-spoken Sunday school teacher. He then launches into a discussion of how acting is not his “thing.” His “thing” is building a business and making money.

He manages to slip into the conversation, however, that he has been offered parts in movies made in California. And he adds that he is a “passable” actor.

“I don’t think Laurence Olivier is going to worry too much about losing any work,” he quips.

Money is the bottom line at EO Corp. Though Owensby declines to discuss dollars spent and dollars returned in specific terms, he proudly proclaims that none of his movies has lost money. Not many filmmakers can make that statement, he says.

Instead, they can make statements about producing artistic masterpieces and the like. Owensby doesn’t make those claims, although he does claim to make good movies.

They are certainly not classics though, nothing on the order of “Gone With the Wind” or “Casablanca.” They are movies like “Hootch” and “Living Legend.” They are B-grade films, as critics call them, movies packed with violence and action but no sex, no nudity and no message.

Owensby  says he gears his films toward blue-collar workers, people who go to movies for entertainment, not to learn, not to get a new perspective on a situation.

“We don’t do message pictures,” Owensby says flatly. “We’re in the business of entertainment, selling escapism. I don’t think someone can escape and have a message. Message pictures, as a whole, do not appeal to mass audiences.”

Owensby says the only message his films have is, “Don’t mess with the good guys.”

“Most of our pictures have an international flavor and they just happen to take place in the South,” he says, adding that they are not the usual fare showing Southerners to be stupid rednecks.

“Hot Heir” is an example of the Owensby Movie formula — international flavor, filmed in the South, bad guy unsuccessfully tries to get good guy, action, slapstick, no message.

Owensby is not in this one, though. “Hot Heir” is  a story about a wealthy man who ties and leaves all his money to his nephew. The bad guys try to cheat the nephew out of his inheritance. We can all guess how it ends.

The predictability of Owensby’s movies don’t bother him; neither does the ailing state of the movie business in general.

“There’s always going to be a place to sell a film — Home Box Office, home video — a lot of places to  go with a movie,” Owensby says, adding that the trend in declining movie attendance is about to turn  itself around.

“This summer will be the largest grossing summer of all time,” he says, failing to add that movie-goers will be paying the largest amount of money they ever have to get into the blockbusters that Hollywood is sending out.

Owensby doesn’t want to compete with the Hollywood products this summer. Instead, he’s waiting until the fall to release “Rottweiler,” which he describes as his best yet.

It’s a story, filmed in beautiful, bloody 3-D, of attack dogs who somehow break loose as they are being transported. The dogs attack a mountain resort. We can all guess how it ends.

Owensby is starring in this one and sharing top billing with his dog, Damian, a Rottweiler who bit one of the trainers during the filming of the movie.

Building a movie studio isn’t easy, he says. He has worked hard and paid his dues. He says he also plays as hard as he works. For his enjoyment he goes to movies. He has seen them all and seems to have opinions about them all.

“E.T., the Extra Terrestial” is about his favorite  of the films now being shown in movie theaters. “Reds” he found boring. He liked “Star Wars” and “Superman” and “Porkys” and the “Godfather” but thought “One From The Heart” had no story.

And Owensby doesn’t like any of Woody Allen’s films.

He’s equally critical of his own productions. Some are good, some are bad. One — “Wolfman” — he even considers ridiculous.

He doesn’t believe any of his movies will ever win an Academy Award, but says if one is presented, “I would take it and run because it would definitely be a mistake.”

He is also critical of critics, saying few of them even know how to make a movie, much less what’s good about one. And he throws barbs in the direction of the movie industry itself, much of which has chosen to ignore Owensby and his little studio — an organization he says has assets of more than $10 million, employs 44 people full time and with 130,000 square feet of soundstages is the largest movie studio on the East Coast.

“The easiest thing I could have done was to move to Los Angeles and open an office,” he says. “But I didn’t have the desire to do that. I desired to do it here with real people.”

One of those people Owensby considers a real person is his corporate pilot-production manager-studio manager Mike Allen, who describes Owensby in almost gushing terms.

“He’s one of the finest people I’ve ever worked for,” says Allen, who left the armed forces and became a movie-maker, just as simply as that. “He’s a businessman. He has no ego. This plant here would probably like to be called somebody’s ego trip, but it’s not. It’s a factory.”

A filmmaking factory, of course, and a newcomer to an established industry. But Owensby believes the filmmaking establishment is beginning to take him and his work seriously.

“You better believe it,” Owensby says, smiling when asked about whether he is taken seriously. “Very seriously. They cannot compete with us because of the problems they have with unions and all.”

Owensby says his production team can cut 35 per­cent off the cost of a film simply because it is not or­ganized by labor unions.

“They (the films produced by Hollywood film­makers) become a living, breathing monster and nothing is on film,” he said. Conversely, EO Corp. can write a script and get it ready for production without much to-do.

Owensby appears to be a man who likes to have things without much to-do, even though he has built a 7,000-square-foot chalet on the film company property to live in and owns and flies two airplanes.

He adds that he has become a celebrity. “Sixty Minutes” ran a segment about Owensby and his em­pire, and it is scheduled to be rerun in July. And when he leaves the confines of the studio lot, he’s recognized by strangers, he says.

Still, he cautions to avoid thinking that is an ego statement. “It’s no big deal,” he says, but that’s what acting does for you.

For now, Owensby says he is taking one day at a time — just making movies, making money and con­sidering building another movie studio on the coast of South Carolina.

He’ll keep the good guy-bad guy approach alive, he says, but he’s not confusing the roles he plays in his movies with his real life character.

“I’m one of the bad guys. There ain’t no good guys in this business. It’s a business that doesn’t do anything to benefit mankind.”