Variety once called him “the Cecil B. De Mille of the South.” And lately Earl Owensby, a self-described “country boy,” is bucking to be the De Mille of much more.

He runs what’s probably the only feature film studio in the South, and perhaps the largest in the Northeast. It’s located – of all places — in Shelby, a factory town an hour’s drive west of Charlotte. 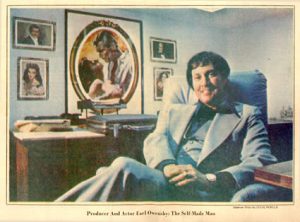 A trip to Shelby to find the studio’s founder is not an easy journey. Owensby, 41 and self-made, is not a simple man. His roots reach from Shelby to a mill town and back to the mountains.

He started as a Shelby tool salesman, then, at 31, began his own company. Carolina Pneumatic led to 11 other companies, from furniture to textiles to air service.

Owensby even had time for failure. He marketed a foot-powered “pedal car,” an idea whose time never came. He ran for the North Carolina House, and was narrowly defeated in a 1972 Democratic primary.

“I’m from a small mill town,” he said then. “I only want to get some things done for them.”

In 1973, Earl Owensby decided to make movies. In his Shelby studio he made six films, from the 1973 “Challenge” to the soon-to-be-released “Seabo.”

The films emphasized violence – 11 close-up killings in “Dark Sunday,” a revenge film – and relied primarily on Carolinians for cast and crew.

At the center of the films – as star – was Earl Owensby. He was a strong, silent type, did most of his
own stunts, and, like his films, received better reviews with age.

Owensby distributed his films in 42 countries. He even sparked a still-pending congressional hearing by writing and testifying to a subcommittee that film ratings wronged independents.

“They’re harder on the small, humble folks of film,” he said then. “We don’t have the clout.

“Altogether,” says Erv Melton, a veteran producer at Carmel Co. in Charlotte. “Owensby has made the industry aware that film exists in North Carolina.”

Earl Owensby seems a man of opposites: a Hollywood competitor who refuses to move from Shelby; a man of wealth who talks like “a country boy;” a violent screen image who neither smokes, drinks or swears.

The Scene In Shelby

The sign off 1-85 reads “Shelby, The City of Pleasant Living.”

Other signs – the franchise flags along the way – are less reassuring. But this town of 25,000, supported by small business and factories, seems pleasant enough.

A few miles from its center stands another sign. “EO Productions,” it shouts to a quiet road. A massive poster of Earl Owensby as “Death Driver” (one of his movie roles) looks out from beneath.

Behind is a 44-acre, $5 million mini-empire. The long, low buildings are offices, laboratories, a guest house. The large, block buildings are studios and storage. The backlot is still a “Seabo” prison camp.

The home features a sundeck and pool. On the runway nearby is a small Rallye; the larger Aerostar is at the airport. In the parking lot are the Thunderbird and Pantera; the Rolls is with Owensby.

He’s out – shooting. But the people who share his empire are willing to talk about him.

Gene Blackburn, vice president for finance, says every part of the empire is paid for.

“Earl’s always had the same philosophy,” says Blackburn, who’s been with Owensby since the original Carolina Pneumatic. “You use the resources you have. As a film makes money, you add to the studio.”

Owensby has never lost money on a film. Blackburn says, and went into movies strictly for profit. Films run between $300,000 and $700,000, and “generally return EO double the investment.”

Owensby owns every share of EO, says Blackburn, and he’s never designated a second in command. He leaves directing and editing to others, but his acting is viewed as another form of control.

“It’s partly to save money,” says director Jimmy Huston, a young Atlanta native whose first feature was “Dark.” “But Earl is afraid to rely on a lead who might leave. This way he always has himself.”

Some call that self-reliance. Others call it ego. “He has to have a monopoly over everyone and everything,” complains one actor. “We used to call it Ego Productions, not EO Productions,” agrees a former associate.

Whether ego or independence, Owensby seems to thrive on opposition. His first film was “Challenge.” His first character was named Frank Challenge.

“One thing you learn about Earl,” says wife Elizabeth, looking less than 32 years, “is that you never tell him, ‘You can’t do that.’ If you say that, he has to show you. Like Hollywood said it about his filming and everyone said it about his acting.

“..It’s all in the challenge for Earl. That proving himself keeps him alive.”

Owensby doesn’t have hobbies. Instead, he has telephones. Two hundred lines go into EO, seven into his home alone. Two phones in the bedroom, two on the rarely used sundeck, one in the den moved three times with his favorite chair. His office toilet has three lines.

He’s a salesman, as he admits to all. “What I love most,” he says, “is just getting out there with that attache case and meeting people. Selling.”

There are those, like one actor, who complain, “He exaggerates, pushes images instead of truth.” But most agree he’s a salesman who sells well.

“The best I’ve seen in 17 years,” says Blackburn. “He can deal with the sophisticated because of his self confidence. And with the cruder because of his working class background.”

Because of that background, he deals well with his workers. Even those who complain about ego and exaggerations say salaries and side benefits are more than ample.

When filming, he accepts no other name than Earl, sips Tabs and trades jokes between takes, delivers messages taken at home for the crew.

The word one hears most about the atmosphere is “family.” “Create a family feeling,” Owensby instructs his staff. “And that family will create a good thing.”

Right now Owensby is filming with his “family” and the journey leads to that location.

The road to the film site narrows and meanders more as it makes its way through the farm and mill towns. Polkville, Five Forks, much red clay in between.

Cliffside, another mill town, is nearby. There Earl Owensby first experienced family.

Cliffside is now in decline. But when owensby lived there so did 2,500, nearly all working for Cone Mill and nearly all renting from it.

Owensby lived behind the railroad tracks in a small home with an outhouse in place of plumbing. As if to point up the poverty, the mill owner’s mansion was next door.

Owensby was adopted, a fact he calls “an honor.” And Blackburn adds, “They must have handled it well. You’d expect an inferiority complex, but he overcame it or hides it well.”

“He was the only child and they loved him to death,” says Lucille Wallace, a cousin. “They were poor but they sold things out of the house to get what he wanted.”

Earl helped get what he wanted by working at the movies. He made his first money bringing ice water to the cashier, then graduated to popping corn and running the projector.

“Always gimmicks,” says Brownlee Davis, his best friend then, who still lives in Cliffside. “The most amazing one was the bubble gum machines he set up all over town. Never did understand where those machines came from.”

Later Owensby worked at the mill and by 17 had acquired a yellow Cadillac. “Before he could drive,” says Davis. “It was used, but it had the name …. Earl liked to have the best.”

It was Davis who drove Owensby to the Marine recruiter, for what turned out to be a five-year hitch. He’d always been fascinated by combat – saw “Guadalcanal Diary” 12 times – and Davis says, the Marines toughened him.

“He would always be telling everyone, till when he left,” says his cousin Lucille “that he was gonna make Cliffside remember him. That he would be more than they thought he was. Be something special.”

“You have to understand the mill town,” says Blackburn. “The mill owners are looked up to like Big Brother, and Earl resented that. His way wasn’t to charge their mountain, but build his own. Just like he says to Hollywood now, ‘You keep California. Shelby is as good.'”

Owensby returns to Cliffside often, making all the important funerals. He arrives in the Rolls.

“Everyone has their utopia,” he says. “And Cliffside is mine. Never find any finer people. They were family – that whole town adopted me.”

The narrow road turns narrower as it reaches a sign saying “Camp McGill.” It turns to dirt, then dust, as it moves into the mountains.

Owensby was born in the mountains. He was born out of wedlock to a mother who later shot herself and a father who was killed driving moonshine down a Tennessee mountain.

His mother had three other children – by different fathers – and Earl, the third, was one too many.

She decided to give away Earl because his legs were ill-formed and he would cost more to care for.

He wasn’t in contact with his former family – he didn’t want to be – until a chance meeting with his first grandmother.

She told him his mother had just died. He said he felt nothing.

“I don’t blame them for giving me away,” he says. “I certainly have shown it was for the best, haven’t I?”
Owensby is again in the mountains. Behind him a long waterfall cascades to his feet. In front of him an escaped convict hides behind the rocks.

Owensby is Seabo, the bounty hunter for whom the film is named. He wears a Mountie hat, khaki shirt and jeans, with an empty hip holster at one side. A sawed-off shotgun is in his hand.

He stands on a boulder, half-crouching but firmly-planted, looking, like one of the flag-raisers at Iwo Jima. He’s tall, solidly built, with the dark good looks of the mountains around him. His legs still move ploddingly.

“Freeze,” he barks in a bulldog voice.

The convict pokes his head from the hiding place. Seabo lets loose two blasts from his barrel. The outlaw falls face-down into the water.

Seabo has triumphed again. Like most of Owensby’s characters, he is a loner striking out.

Then – quickly – he turns salesman.

The words are delivered as gently as the smile.

“We’re not trying to make ‘Gone With The Wind,'” he goes on, needing no prodding. “No artsy-craftsy – I by-pass on that. Good drama to show we can do it and good gun stuff to sell tickets.”

The last gun stuff must be re-shot, he’s told. He waves, all ease.

“We’re sellin’ the state, too,” he goes on. “We’re sayin’, ‘Look at us.’ We can even make Manhattan; just shootin’ the right angles …. Film could bring a pile of money here – actors coming in, tourists galore.”

Karo syrup – fake blood – is dabbed on the outlaw. Owensby continues in Sunday School tones – he teaches there – but preaching his own gospel.

“I love the state. I wouldn’t go to Hollywood even to star. My favorite story … is about a man who searches all over for diamonds, and finds them in his own backyard. Well, here’s my backyard – and I’m puttin’ my films there.”

The outlaw is ready. Owensby is called.