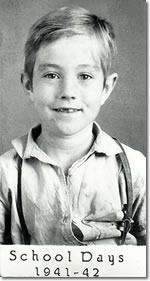 If another Cliffside boy ever made good the same way Earl Owensby did, we’ve never heard of him. There was nothing in his background to indicate he would someday escape cotton mill life, or something like it. Adopted in infancy by Tom and Bertha Owensby, who spent their lives in the mill, his future—like that of many a Cliffside kid—depended solely on how hard he would scratch and claw to whatever he might become.

In his early teens he began hanging around the Cliffside Theatre, sweeping the floor, tending the popcorn machine, taking up tickets and eventually running the projectors. Seeing practically every picture week in and week out, Earl got movies in his blood, but had no inkling how he’d ever do more than enjoy them.

After high school Earl went into the U. S. Marine Corps, then into sales. Eventually he created his own hydraulic equipment company. But a few years later that old movie bug started biting, and Earl decided to make a motion picture of his own—but first he had to learn how.

From these six in-depth newspaper features you’ll learn how he did it—and what happened next.