Not surprisingly, on the date of R. R. Haynes’ death, Feb. 6, 1917, he held the majority of Cliffside Mills’ stock, double the number of shares of the nearest holder.

Here are the top 10 holders of the 2,500 outstanding shares:

R.R. and Charles Haynes had added substantially to their holdings in the previous two years, by 186 and 279 shares respectively. Two years earlier T.B. Lovelace and J.F. Whisnant, charter investors, had owned 200 and 50 shares respectively. Now, in 1917, they owned none. 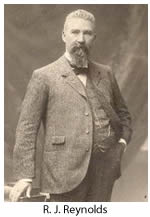 What is surprising was the second largest shareholder. His name became familiar around the world: R. J. Reynolds, the tobacco tycoon, whose company three years earlier had introduced Camel cigarettes, the first nationally popular brand in the United States and beyond.

A version of this article appeared in the Spring 2011 issue of The Cliffside Chimes, official newsletter of the Cliffside Historical Society.