In the earliest days of World War II, Cliffside was a beehive of Civil Defense participation. Someone, a committee perhaps, divided the town into 24 Civil Defense zones. Each zone had two civilian air raid wardens assigned to it, usually men who lived within the zone. 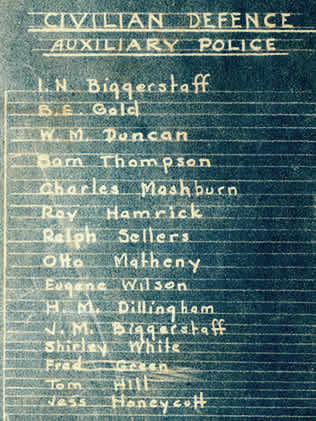 There is a blueprint of a town map, dated May 25, 1942, drafted by R. E. Carpenter, which shows the numbered zones and the assignments. For example, Zone 20 was the Fairview area, manned by N.D. Green and C.D. Scruggs. Zone 5 was the South Main neighborhood, and the wardens were Frank Whitaker and Loy Wortman.

There was an additional zone for the “Mill Buildings, Warehouses and Filter Plant,” for which five men were responsible. Furthermore there was a “Auxiliary Police” force, in which 15 men served. See the list at right, which made up a small segment of the blueprint.

At this point in 1942 we had only been at war for five months and no one knew what to expect. There were serious concerns that enemy bombers would appear, probably at night, to lay waste to the town and, in particular, the mill.

At their training meetings, likely at the town hall, the contingent of 68 volunteers may have studied the markings and silhouettes of Zeros and Messerschmitts, but mostly their duties were 1) to make sure everyone in their zone turned out their lights during air raids or drills, and 2) to alert the mill officials if they saw anything unusual.

Signals and rules were devised specifying how citizens were to react during air raids. These instructions—referring to the mill whistle—were issued to everyone in town:

WHEN THE WHISTLE BLOWS A CONTINUOUS BLAST FOR 2 MINUTES:
ALL house and street lights are turned off or blacked out.
Autos may proceed at 15 miles per hour – lights on low beam. Pedestrians may continue along the streets.

WHEN THE WHISTLE BLOWS A SERIES OF SHORT BLASTS FOR 2 MINUTES:
ALL lights continue to be blacked out.
All cars pull to curb and stop, putting out lights.
All pedestrians get off the streets and take shelter.

WHEN THE WHISTLE BLOWS A CONTINUOUS BLAST FOR 2 MINUTES:
ALL lights continue out.
Pedestrians may leave shelter and resume activities.
Cars may proceed at 15 miles per hour, lights on low beam.
When the street lights are turned on the blackout is over.

A year later all this apprehension may have dissipated when it became known that Japan’s aircraft carriers, what was left of them, could never reach the West Coast, and that Germany had no carriers.

If you have memories of this or any other activity during those years, we’d like to hear your stories.