He was a Cliffside boy. The photo shows him in Mrs. Beatty’s third grade class in 1939-40. Some of his classmates that year were George Bridges, Carolyn Watkins, Billy Hill, Bud Padgett and Peggy Deck.

His parents were Justice and Zena McCurry Stallings. In 1930 the Stallings lived at 18 Cliffside Street. Jestie was a weaver in the mill.

That year the Stalling children were Coleen, Lois and Ruth. Vernon was born on Dec. 30, 1930. By 1935 the family had move to 1 Fifth Avenue East. Younger sisters Melba Jean and Brenda came along later.

Justice, or Jestie, as he was called, ran a tie-in machine in the weave room at the mill. He and his family lived in various places in town, one being a three-room house below the Charles H. Haynes home.

When Vernon reach his teen years the family had moved near the Mount Pleasant community, and Vernon went to Mooresboro school.

In 1948 Vernon enlisted in the Army and, after boot camp, was stationed in Japan. In 1950 his outfit was sent to Korea. He was a Private in the 24th Infantry Division, 21st Infantry Regiment, 1st Battalion, B Company.

In the last days of June, 1950, a massive North Korean army swept south into South Korea. The ill-equipped and under-trained 24th division was thrown into combat to slow the communist invasion. They were vastly outnumbered. A couple of weeks into the fight, a large number of U.S. soldiers, including Private Stallings, were captured by the North Koreans.

Also among them was Wayne “Johnnie” Johnson, a PFC from Lima, Ohio. After American planes accidentally strafed and killed several prisoners in his group, it occurred to Johnson that these men might be forgotten. “But their families have the right to know where or when they die,” he thought.

Ultimately, over 700 of our captured soldiers, including Vernon, were started on a march northward toward China. It was dubbed the “Tiger Death March” after the brutal North Korean major in charge of the operation, whom the prisoners nicknamed “Tiger.”

With a pencil stub Johnson began noting, on discarded cigarette packs and strips of wallpaper he’d scavenged, the names, dates and the units of those who died along the way and in subsequent prison camps in the north.

Johnson indicates beside Vernon’s name that he died on November 2. The cause of death was pneumonia, according to a survivor of the march, who knew Vernon and later informed the family of his fate. Military records indicate he expired on the march from Manpo to Chunggang-jin, North Korea.

Johnson ultimately added 496 names to his scraps of paper, which he hid in holes in the walls and floor of the camps. Eventually, in the next three years of captivity, he transferred the information to larger pages, which he hid in an empty toothpaste tube.

The fate of many of those who died might forever have been a mystery had their names not been included in “Johnson’s List.” The list did not surface publicly until 1991 when Johnson shared it at a Tiger March veterans’ reunion. It has since helped scores of families find closure to the sad loss of their young soldiers.

The world learned of the list when Reader’s Digest published the story in its January 1997 issue. From the list’s many pages, the magazine’s editors happened to select the one showing Vernon’s name (circled). It gives his hometown as “Mooreston, N.C.” 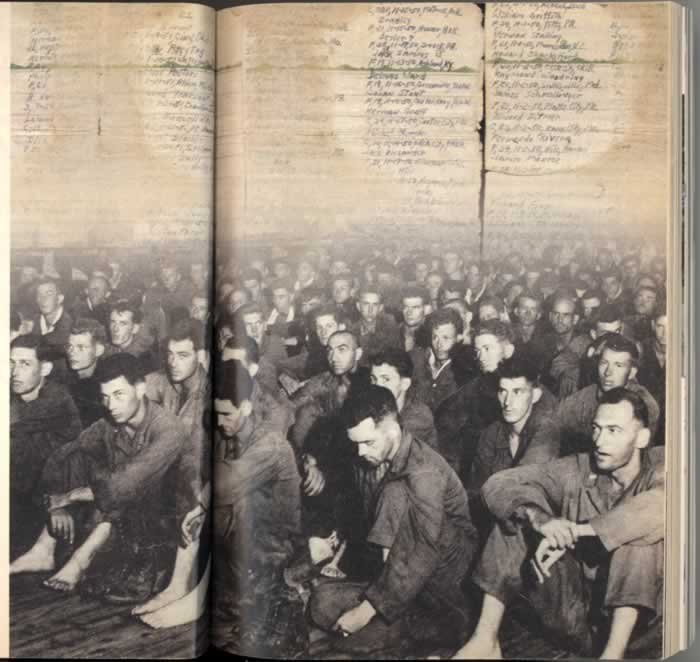 Vernon Damnon Stallings was one of 33,000 casualties of that war, as was A. C. Greene of Cliffside. Many of our boys served in Korea and returned safely. Among them were Roy Lee Harris, Bobby Harris, Jack Biggerstaff, Jim Swing, Billy Goode, Claude and George Bridges, Billy Rollins, Harry Ingram, Bobby Jeff Hames and others.

A slightly different version of this story appeared in the Summer 2009 edition of The Cliffside Chimes. Thanks to Ed Scruggs for alerting us to the Johnson’s List story and providing a copy of the magazine, and to Judson O. Crow, Horton Landreth and Coleen Stallings Johnson for supplying amplifying information about Vernon and the Stallings family.

FOREST CITY — Like most people who live long enough, Coleen Johnson has mourned relatives who died. But the death that was most cruel was her brother’s, Vernon Stallings, who died in Korea at age 18.

That was 46 years ago and the intervening years had softened the pain.

But three weeks ago it all came back, in full force.

The reminder came casually, as Johnson thumbed through her January copy of Reader’s Digest. She came across a picture of American prisoners of war captured in Korea in July 1950.

There sat her brother, taller than other soldiers seated near him, easily recognizable.

Justice William and Zennie McCurry Stallings were born in this county, he in Gilkey (the youngest of nine children), she in Golden Valley. They had six children, five girls and one boy; Coleen was the oldest, Vernon Damron, named after a war buddy of his father, was the fourth.

“My father had joined the Army in World War I, when he was 16,” Johnson said. “He fought in Germany and was wounded in the leg by shrapnel.

“After the war, he came home and went to what was then State College (now N.C. State University), then went to work at Alexander Mills, then Cliffside. He was 27 when he and Mama married and later they built a house on the Cleveland-Rutherford County line.”

Vernon was born on December 7, 1931, and was 10 years old when Pearl Harbor was bombed. “He had nightmares about that for a long time,” she said.

“He knew about Dad’s early enlistment, so Vernon was 17 when he enlisted in the Army. He went overseas, was in Japan, and expected to come home and get out of service in August.”

“But in June the Korean War started and the outfit he was with went to Korea. By July 12, he had been captured and was a prisoner of war.”

When a brutal North Korean army major took command of the unit in October 1950, he had 758 POWs; when the conflict ended in August 1953 only 262 of that group had survived.

The men had made the infamous death march along the Yalu river and nine days of marching across 120 miles of steep mountain terrain.

Because of one courageous soldier, Johnnie Johnson of Lima, Ohio, a record was kept of the names of the POWs in the 24th Infantry who died.

According to the Reader’s Digest article, that soldier went through extremely difficult, even life-threatening times to record names and dates, knowing families would want to know when, where and how their relatives had died.

The War Department notified the Stallingses that Vernon was missing in action.

“My mother knew a woman whose son was missing, who had been notified by a taxi driver who brought the information to her. My mama said where she lived few taxis came, so when she saw that taxi coming up the driveway she knew then something had happened to Vernon.”

After the conflict, when the prisoners were repatriated, Parris Greene, whose parents lived on Mount Pleasant Church, came to see Vernon’s parents.

“He was in service with Vernon, and was a prisoner with him. He said he knew Vernon was dead.”

And he had told about the march, the Koreans giving the soldiers only a handful of corn, turning them into the woods to find berries to eat. They were starving to death, had no heat and some had no boots. Vernon died of pneumonia on November 2 or 4.

“Until we learned that, there was no end to the story because we never had a body,” Johnson said. “We were told that the bodies were put into one big ditch. But my parents weren’t satisfied, they put a marker with his name in Cleveland Memorial Park at Boiling Springs.”

In 1985, Johnson’s parents died within one month of each other. Now they rest, side-by-side with the marker of their only son, Vernon.

In between those years, Coleen married Wade Johnson, lived first in Stanley, then returned here and he was a supervisor at Fieldcrest-Cannon Mills in Alexander Mills until retirement.

Coleen Johnson still gets teary-eyed when she speaks of her brother. But she knows it was a blessing that the family was able to learn positively what happened to Vernon.

She said, “I think it was good that Johnnie Johnson risked his life to bring those names home so parents knew what had happened, and my dad’s prayers were answered. He’d always prayed that Vernon wouldn’t suffer, and he was a prisoner and sick a short time, so he didn’t.

“I see the hand of God in things that happen,” she said. “I had taken the Reader’s Digest for years but had let my subscription lapse. I missed it, so I renewed and, when the first issue came, there was Vernon’s picture in it.

“I read it and cried,” she said. “I was glad he got recognition. People around here knew him and they called me to tell me they saw the story, but it all came back to me. And it was hard for me” to re-live that.