On April 9, 1935 the Spartanburg Herald ran a story about a Cliffside event that occurred 25 years earlier. It must have been the only one like it before or since, anywhere. It was an unusual 3-mile foot race of Cliffside men. Unusual because the spectators were aboard a moving train! Remember, this was in 1910. Here’s the story:

Cliffside, April 8 — Few athletic events of recent Years have created as much interest in this vicinity as a marathon race held at Cliffside a quarter of a century ago.

The race was run on a course the entire length of the Cliffside railroad, which extends from this community to Cliffside Junction, the present site of Avondale, where it connects with the Seaboard Airline.

At that time the carriage road ran parallel to the railroad practically all of the distance. A large crowd was present at the junction to see the beginning of the race. The contestants were: Claude Scruggs, Dick Scruggs, Homer Bowing, Pink Beason, Guy Fortune and Wilson Powell. Claude Scruggs and Dick Scruggs are still residents of Cliffside.

A crowded train on the Cliffside Railroad filled with interested spectators, watched the progress of the runners from along the railway. As the race progressed, all of the contestants fell out but Claude Scruggs, Dick Scruggs and Homer Bowing, all of whom ran the full course. Claude Scruggs and Dick Scruggs ran abreast the last two miles of the race and up to the last five paces it appeared that the contest would be a tie. Excitement was very high at that stage of the race. With almost super human effort, Claude Scruggs forged a few inches ahead of Dick Scruggs and won the marathon. Three seconds later Homer Bowing, third in the race, passed the line. The winner, Claude Scruggs, made the distance of three miles in exactly 19 minutes, which was considered quite a record. Over 500 spectators were present to see the finish of the exciting race.

In those days there were few events of an entertaining or recreational nature in the small towns and villages as compared with the many contestants and gatherings of various kinds that are held today. For this reason foot races were sure to attract many spectators and such occasions were second only to the annual visit of the Circus. 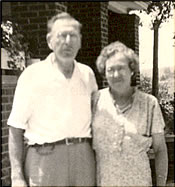 So, we’ve learned that, in pre-automobile days, a highway was called a “carriage road,” and rightly so. And a tycoon like Mr. Haynes, if he felt like it, could put his entire railroad to use to help his townspeople have a good time.

By the way, the race winner, Claude Scruggs, who was 23 in 1910, would later marry Aquilla Hamrick from the Mt. Pleasant community. They’re shown at left in a photo from the 1950s. At their home on Ferry Road they would raise their children, Ruth, Joe, Jack and Harry. Some of their descendants still live there.