Our Cleveland County Correspondents, Buzzy Biggerstaff and Sam Davis, went over to Cliffside awhile back on another mission for the web site, and happened upon an artifact that has been out of public view for decades. That artifact is the stuffed eagle that sat for at least half a century in our town library. We would have bet it had gone the way of the Memorial Building itself–to the salvage yard. They not only found the eagle but uncovered, as they say in museums, its provenance (that is, where it came from). 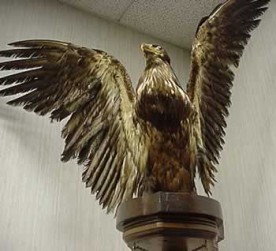 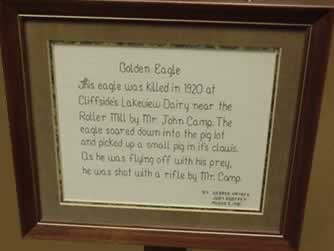 The eagle now occupies a spot in the conference room at the new mill at Cliffside. The needlepoint shown, a 1991 collaboration by George Haynes and Judy Godfrey, hangs below it. It reads:

This eagle was killed in 1920 at Cliffside’s Lakeview Dairy near the Roller Mill by Mr. John Camp. The eagle soared down into the pig lot and picked up a small pig in its claws. As he was flying off with his prey, he was shot with a rifle by Mr. Camp.

One more coincidence, just a month ago we posted a 1920s photograph of Charles F. Moore posing with a stuffed bird, which came from the collection of Mrs. Blanche Edwards Campbell, for years our librarian. Our crack photographic analysis team whipped out his magnifying glass and determined it is the same bird! Was Mr. Moore the taxidermist?

Two years later, in 1922, the eagle referred to here got a companion when another large bird was shot during a hunting trip to the mountains. This one was, they said, was trying to steal someone’s rooster.

Note: On Oct. 10, 2009 the bird and the plaque became the property of the Historical Society and now is on display in our office.