For a time in the 1920s, Cliffside School published a classy four-page monthly tabloid (shown at left). Obviously produced at a professional printing company, each issue was chock-full of information that now amounts to history. In them, we read about people we may have known and events that inform us of the past. The writing is surprisingly good. Apparently students were taught to write well in those days. Actually, from all indications, teachers and students in those times had different priorities and levels of dedication to teaching and learning.

Jim Haynes forwarded one edition of Cliffside School Life, and Phillip White provided two more. On these tabbed pages you’ll find some of the better items we found in them. We’d like to collect and preserve them all. If you have access to one or more issues, please share them with us.

The paper was named by Albert Thomas, Jr., in a contest. Some of the articles are signed, others not. At least one of the pages in each edition was taken up by ads for the Cliffside Mills Store or other local concerns. One for Cliffside Mills Furniture Store, advertising “Metallic and Plush Caskets” in all sizes in different prices, boasted that “We have a new lowering device for placing the corpse in the grave which dispenses with the use of hand straps.”

The Growth Of Our School

When Ciffside was being built, just after the mill was erected, people began to move to Cliffside to make their home there. We find a group of boys and girls. Mr. Raleigh Haynes with his clever mind, began to make preparations for a school. This great man saw that our boys and girls needed more learning and training. He does not like to see them playing on the streets during school hours. We found that Mr. Haynes was always interested in us and often visited the school.

In 1901 the first school was started in Cliffside. A two story house was used for a while and then, as there was ample room in the finishing room, the school was moved down there. They continued to teach in the mill until the trustees decided that it would be best to move the school. The main reason for this was the need for more room. The school was then taught over the old store, in the town hall, but that was too small, and Mr. Haynes, together with a few others, began to make plans to build a school building. By the next fall a handsome building was erected. The new building had one large room and a few side rooms. After we had a new school, the trustees decided to change from four months to a six-month term in addition to which some one usually taught a summer school.

The enrollment kept increasing until even this building was not large enough to hold the pupils. Again Mr. Haynes built a new room and after a few years two more rooms were added.

Six years ago a group of study boys and girls went in the “big room” as it was called to await the arrival of our new professor, Mr. C. A. Erwin. Upon the arrival of Mr. Erwin he asked if any one had him pictured in their mind. Katy Crawley raised her hand and said “I expected to see a short fat man with a big red face and a bald head,” but alas, he was the opposite.

A typical American, tall with a very intelligent looking face. He began his work with three pupils in the high school and with seven teachers.

Our school building was not large enough to hold all the students so that part of the Padgett house on Main Street had to be used. The next year Mr. C. C. Erwin joined his brother and the Carpenter house was used as a high school building.

The second year Mr. Erwin was here the teachers increased from seven to 13, the next year from 13 to 16.

Our membership increased so rapidly until the question began to arise as to what they were going to do with all the boys and girls. They decided to build a nice up-to-date brick building.

So the third year Mr. Erwin was here we moved into the new building which we now occupy. The number of teachers increased from 16 to 19, the first year and the following year to 20.

Mr. Erwin has been teaching here six years. We feel that he is one of us and we could never give him up. Mr. Erwin is always ready to lend a helping hand and never has anyone gone to him for advice who did not get it. He founded the Cliffside High School and not only that but he has promoted it to a standard High School and one of the best in the State.

We live now in an age of wonderful inventions, one invention follows another and it is a difficult proposition to try to imagine what will next be invented. It is marvelous to stop and think of the many changes that have been made sine the time of our great grandfathers.

The improvements in methods of communication have been among the greatest of all. It still remains a mystery to us how we listen to people who have been dead for many years sing in our parlors by means of phonograph, it is mystery how we can talk to our friends over telephone, it is still a greater mystery to us when we see the airplanes soar over our heads high up in the air like birds, but I believe that the greatest mystery for us today is the radio. To make slender wires carry signals or speech seemed a miracle, but when it was discovered that the voice could be carried without wires the whole world gasped with amazement.

Now the radio is used almost worldwide. One person might be in a lonely farmhouse, another in a city apartment and perhaps another on an island, with just merely the turning of a knob on their radio each hears the [unreadable]  by heard by thousands instead of only hundreds, sometimes the weather man is telling of an approaching storm, sometimes a story teller is amusing the children by Mother Goose Rhymes, market reports are broadcasted, in fact there are things to be heard over the radio that furnishes amusement and pleasure for the entire family, altho’ the word radio is so intangible that many, many owners can not determine from what source they are being entertained.

We’re a band of students gay,
Who at Cliffside meet each day
For there’s something there,
That we all like the best.
Maybe ’tis the atmosphere,
Maybe ’tis our country dear,
But we try to work in earnest,
Not in zest.

Chorus.
Shout three cheers for dear old Cliffside,
‘Tis the finest school we know,
Here the lessons are all fine,
You may learn them just by trying.
‘Tis the place for every jolly girl and boy.

Here we have a big play ground,
‘Tis finest in the town,
And of fun you’ll find that we all like the best.
For we mind the golden rule
And we love to come to school
Where we do our work in earnest,
Not in zest.

We will ever lift on higher banners,
And raise to her our songs of praise,
We’ll be ever loyal sons and daughters
To the dear old Cliffside days. 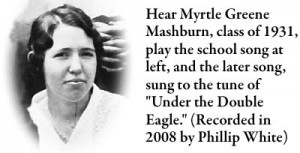