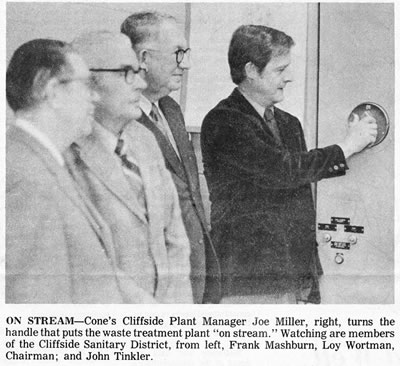 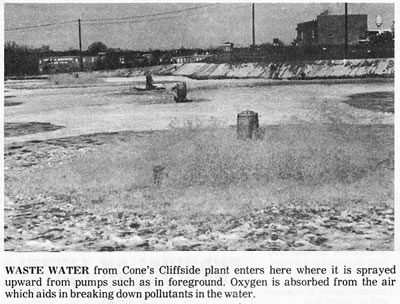 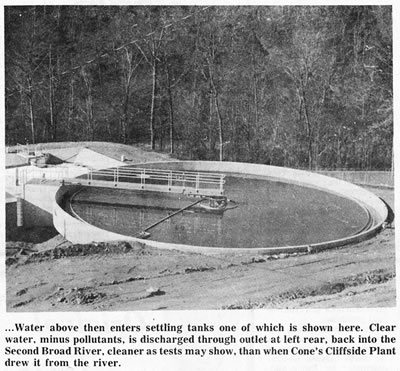 This is one of several waste treatment plants Cone has put into operation in North Carolina and South Carolina in a multi-million dollar program for pollution control. Cone’s Cliff-side Plant is located near the Second Broad, River, which the treated effluent enters. The Second Broad later merges with the Main Broad and continues into South Carolina.

The Cliffside waste treatment plant includes a chlorine contact chamber and sludge drying bed. The waste disposal plant with pumping station is designed to treat 1,750,000 gallons a day of industrial and domestic waste. The settling basin holds approximately six million gallons or four days’ output from the textile plant. A large aeration pond has with 13 stainless steel floating aerators. There is a lift station at the river which carries dye waste to the aeration pond.

A sub-station and control building include laboratory facilities for testing and checking dye waste.

Cone Mills is a pioneer in textile waste treatment. The company constantly works to improve waste treatment through research and im-provement of all of its pollution control equipment-at all plant locations.

Pollution control is necessary because of the very nature of the textile plants, which require use of large quantities of dyes, other chemicals, and, of course, water. Textiles could not be manufactured otherwise.

The quality of Cone’s waste treatment has improved greatly over the years, as knowledge of treatment techniques has grown. New technology is constantly being developed; research is going on continually.

Cone engineers and scientists have been working on pollution problems for many years. They have contributed many research papers to technical journals and conferences on waste treatment and pollution, sharing their knowledge for the benefit of all.