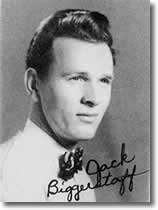 HENDERSONVILLE, N. C., Nov. 18 — Mr. Jack Foster Biggerstaff Sr., 76, known and loved by all his many friends as “Pick” went to play baseball with the other greats who have passed on before him on Tuesday, Nov. 16, 2005.

He was the son of late Kate and Broadus Biggerstaff. He was a graduate of Cliffside High School in Cliffside and attended Gardner-Webb College as well as many professional courses during his career(s). He was always up for a change and a challenge in his personal and professional life.

His love of baseball was legendary and started when he left his home in Cliffside to play in the Galax, Va. semi-pro league in 1947. He went on to serve at Fort Meade in Maryland as a military police during the time of the Korean War. He leaves behind a life full of laughter especially among those kids he coached and part-time fathered when he was director of the Drexel Foundation and midway chairman of the Drexel Community Fair in Drexel. Prior to that engagement he was a pioneer in developing the recreation program at Broughton Hospital in Morganton. Not one to settle into a sedentary career he also traveled a great deal as a representative for Canteen Corporation of Chicago, Ill. He and his wife later operated the Riverside Pavilion in Lake Lure for many years. He was a very well known square dance caller and always packed the house on Saturday night. Nothing gave him more joy than seeing others laugh, and dance and sing along with him when the old building shook with the crowds. He also worked with his wife as owners of the Lake Lure Grocery and he always had an old sports story for all who wanted to listen.

Treasured by many and beloved by his family, we will miss him.

His family wishes to thank the staff at Pardee Hospital, the Baptist Hospital in Winston-Salem, and the Four Seasons Hospice and Palliative Care for their kind and compassionate care during his illness.

He is survived by a son, Jack F. Biggerstaff Jr. of Fort Lauderdale, Fla.; a daughter, Candace Biggerstaff Fisher and husband, Donald, of Laurel Park; two grandchildren, Alexander and Lauren Fisher, both of Laurel Park; his loving partner, Sara Holland Manship; a brother, Bumber Broadus “Buzzy” Biggerstaff and family of Boiling Springs; a sister, Marjorie Elizabeth Phillips and family of Newton; and many loving nieces and nephews.

A celebration of his life will be held by invitation during Spring Training.

Instead of flowers, donations may be made to Four Seasons Hospice and Palliative Care, P. O. Box 2395, Hendersonville, NC 28739.

We went to Jack’s celebration on an early spring Saturday in Hendersonville. Dozens, perhaps a hundred, of his friends were there to eat, drink, laugh and share memories about this most likable fellow. Toward the end of the afternoon we gathered on the lawn and someone passed out to each of us a red helium-filled balloon. On a countdown we simultaneously released them. Then a curious thing happened. The balloons at first hung low to the ground, then drifted slowly down the slope, over the highway, over a fence and began to cluster against a factory wall. Suddenly as a group they shot straight up high into the sky until a horizontal gust quickly scattered them out over the town and out of sight. We all watched in awe. Was it some kind of sign? My guess it was—from Jack—saying, “Thanks for the party. I love you all.” — Reno Bailey