Home » History » Articles and Stories » The Year of Big Prizes

The Year of Big Prizes

It was that wonderful year 1955 when many of the merchants of Cliffside, in an effort to increase their trade, devised a promotional plan to entice more customers into their stores and shops. Actually there were two plans, the first—during the back-to-school season—was to give away a new car, and the second, culminating just before Christmas, involved awarding cash prizes.

The car, a new 1955 Chevrolet, given away in a drawing on August 27, had been parked downtown for weeks at the curve in front of the garage. To attract maximum attention the car had been placed on a ramp under a sort of canopy. This ad appeared in the Forest City Courier on August 25, two days before the drawing.

The deal was, each time you shopped or frequented a place of business you’d get a ticket that would go in the official container from which the winner would be drawn.

In those days a new car cost around $2,000 or a little more, so it probably cost each of the 15 participating merchants about $150 for their part in the campaign.

So on Saturday, August 27th, at five o’clock, the drawing was held on the second floor porch of the mill office building. (Or was it? There seems to be some disagreement as to exactly where the drawing occurred. See below.)

You had to be present to win, so the multitudes drew near to see who would drive away the new Chevy. One ticket was selected from the thousands in the barrel, and the lucky winner was….

Of course, Roy Lee Harris was there with his camera to record the event for posterity. A photo (very much like this one) was sent promptly to the Courier for publication. The accompanying caption told the story:

Cliffside Car Winner— Mrs. Grover Newton is pictured getting title to the 1955 Chevrolet given away Saturday by the merchants of Cliffside from Solon Smart. A large crowd turned out for the climax of a big sales event. Mrs. Newton said she was “thrilled—I never won anything.” Her husband didn’t even come to the giveaway, but went fishing. He had never won anything either, he said. Mr. Newton retired from Cliffside Mills this year. (Roy Lee Harris Photo) 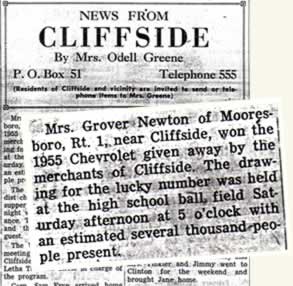 Soon an announcement appeared in the weekly “Cliffside column” in the Rutherford County News. The writer, Mrs. Odell Greene, reported the drawing was held at the high school ball field.

(Could this be true, even though the advertisement, published two days before the event, put the drawing at the mill office, and the official photo shows the winner accepting the title downtown? Stranger things have happened in Cliffside.)

Mrs. Newton lived to enjoy the car for nearly eight years, if they kept it that long. She died on April 7, 1963. Grover outlived her by eight years. He passed away on April 5, 1971. They are buried in Clover Hill Methodist Cemetery near Polkville, N.C. (Source: W.D. Floyd’s Cleveland County cemetery listings

Another giveaway was planned for the Christmas shopping season. This time there were multiple cash prizes and the merchant’s lineup was slightly different.

As shown in this ad from the Rutherford County News in early December, there would be a grand prize of $1,000;

a second prize of $200; and six lesser prizes of $50 each, to be given away at the high school ball park two days before Christmas.

This time the drawing was most assuredly held at the ball park, for we have eyewitnesses, most notably Rebecca Callahan Scruggs, whose father, Milan B. Callahan, won first prize. “I’ll never forget it,” she recalls, “My parents used that money to buy our first family car.” M. B. (shown at right) and his wife Pearl ran the Cliffside telephone company in the ’50s. Read Rebecca’s memories of those years in “Hello, Central.”

Research by Joyce Hunter and JoAnn Huskey. Photos of car and M.B. Callahan from the the Roy Lee Harris collection, courtesy of James Harris.