In August of 1905 Robert E. Haynes opened a bottling works in Rutherfordton on Cleghorn Creek, as we see from this article.

Mr. R. E. Haynes To Open A Bottling Works In Our Town.

Mr. Robt. E. Haynes, of Henrietta, will open up a first-class bottling works in this town in a few days. He has leased a site at the Mineral Springs property for the plant and rented the dwelling recently built by Rev. J. M. Walker in the southern portion of town and will move into it at once. Mr. Haynes is one of Rutherford county’s most substantial citizens and a business man of considerable experience, having been associated with his father, R.R. Haynes, in his extensive business enterprises for many years.

Mr. Haynes will manufacture all kinds of soda water, ginger ale, noka-nola, etc., under the name “Piedmont Bottling Works.” ……. Mr. Haynes is one of those young men who never knows a failure, and it is an assured fact that he will make a success of his present undertaking.  [Rutherfordton Sun August 3, 1905] 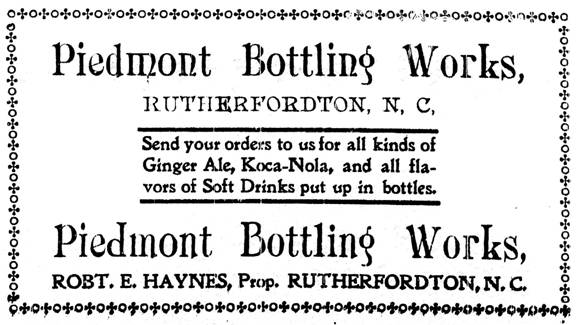 And by month’s end the bottling works was apparently in full operation, as attested by this article.

“Haynes’ Bottling Works,” Rutherfordton’s new industry, is now in full blast, turning out soft drinks of all kinds by the wholesale. Mr. Robt. E. Haynes, the proprietor, is pushing his manufacturing plant, and says he is ready to fill orders for any quantity of soda water of any flavor.  We have visited his plant and tested the quality of his products, and have no hesitancy in saying they are first-class in every particular.  We bespeak for Mr. Haynes a liberal patronage from the trading public.


The Haynes, or Piedmont, Bottling Works was ultimately not successful. But it did have one very notable visitor. According to the Rutherford County News, the world-famous inventor Thomas A. Edison visited Rutherford County in 1906. And as he came through Rutherfordton he was looking for gasoline for his car. Again, according to the News, Cleghorn Creek “was the only place in the county where gasoline could be bought, and rare were the occasions when it was demanded.” “Mr. R. R. Haynes had a Coca-Cola bottling plant there which was run by gasoline, thus having a limited supply for sale.”  [Rutherford County News, November 5, 1931]

Of course, this is a confusion of facts. Surely Edison visited the bottling plant of Robert E. Haynes, not his father’s. And while it is clear that he was trying to profit from the popularity of Coca Cola—see the ad above, touting “Koka-Nola”—he never bottled The Real Thing. 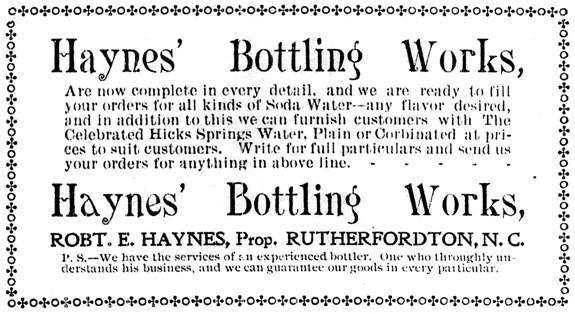