Ironically, the two sons of Daniel and Mattie Freeman both died by drowning—but 52 years apart.

Cliffside, July 21, 1925—Our town was shocked Monday afternoon when it was learned that Mr. Flay Freeman was drowned. The tragedy occurred about one-thirty o’clock at the dairy where Mr. Freeman and 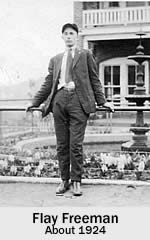 Mr. Gordon Philbeck had gone to take a swim. A deep hole has been made where sand was pumped out to put on the road. It is not just clear how the accident occurred. Mr. Philbeck heard Flay call for help and went to him, he was almost drowned before he could break Mr. Freeman’s hold. He tried again to get him out but was again caught by Mr. Freeman in such a manner that he too went under and it was with difficulty that he got out. Mr. Philbeck called for help and some one phoned for Dr. [Bobo] Scruggs who was on the scene in a few minutes. Dr. Scruggs dived and was successful the first time in locating Mr. Freeman and brought him out. Every known method of resuscitation was used, but was absolutely fruitless.

The family is prostrated and a pall of gloom hovers about the home.

Flay Monroe Freeman was the son of Mr. and Mrs. Dan Freeman and had he lived until the 17th of next month would have been twenty-four years old. He united with the Cliffside Baptist church ten or twelve years ago and was baptized by Rev. D. J. Hunt during his pastorate. Flay was a devoted son and brother and was always obedient and devoted to his parents. The funeral was conducted from the Baptist church Tuesday afternoon at 2:30 by his pastor, Dr. Chas. H. Stevens, assisted by : Rev. M. W. Heckard, local M. E. pastor. A quartette composed of Messsrs. W. W. Nanney, C. H. Wilson, J. B. Freeman and W. B. Wilson sang a special number.

The many floral designs attested the esteem of his many friends. Besides his parents, Mr. and Mrs. Dan Freeman, he leaves one brother, Mr. Cordie Freeman and two sisters, Mrs. Chester Scruggs and Miss Mary Freeman, all of Cliffside. Interment was in the local cemetery.

Cliffside, May 19, 1977—A 73-year-old Cliffside man was killed in a three-car wreck at the intersection of Highway 221A and Island Ford Road here at 5:40 p.m. Thursday, the State Highway Patrol reported. 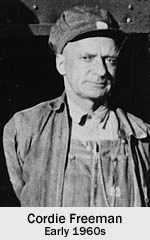 The Atkins and Freeman cars left the road on the left side after going out of control, the investigating officer said, and went down an embankment. The Atkins car stopped in the ditch but the Freeman car traveled farther down the embankment and into Broad River, Church said.

Freeman was pronounced dead on arrival at Rutherford Hospital. An autopsy was scheduled today.

Norma Jean Atkins was reported in fair condition today at the hospital. A passenger in her car, Marjorie Ward Atkins, 18, also of Rt. 1, Mooresboro, was treated at the hospital and released.

Ms. Wease was reported not injured, according to the patrol report.

Both the Atkins and Freeman cars were declared total losses, Church said.

No charges have been filed pending further investigation.

Cliffside— Cordie T. (Shine) Freeman, 73, of Hilltop Drive, Cliffside, died Thursday afternoon. A retired railroad employee, he was a member of Cliffside Baptist Church. He was the son of the late Dan and Mattie Toney Freeman and the husband of the late Madge Daniels Freeman.

Survivors include his sister, Mrs. Mary Freeman Black of Cliffside.

Services will be conducted by the Rev. William Stroud at 2 p.m. Saturday at McKinney-Landreth Funeral Home. Burial will be in Cleveland Memorial Park. The family will receive friends tonight from 7 until 9 o’clock at the funeral home.

Clippings from The Forest City Courier courtesy Joyce A. Hunter