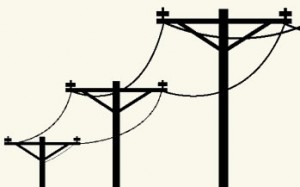 In 1917, with America’s entry into the World War, Cliffside Mills suspended its plans to build a power plant near Mt. Pleasant on the Main Broad River, and dropped its plan to extend railroad tracks to that area. However, it continued to expand its list of customers who used the power generated by the mill.

Over the decades of the 1920s and ‘30s the Company created a number of “lines” extending beyond the limits of Cliffside and Avondale, each of which was treated as a profit center. There was a “Dobbinsville Line,” for example, and a “High Shoal Line,” a “Riverview Line,” etc.

On occasion potential customers in an area, such as Fairview, would band together and obtain an agreement with the Company whereby they could tap onto its power source if they themselves erected poles and lines, and wired their homes—all to the Company’s specifications.

In the Fairview instance, in the fall of 1927 Z.B. Hawkins, R.C Ramsey, C.L. Jones, W.P. Carpenter, W.W. Suggs and H.S. Jolley signed their contract, holding the Company harmless from any liability. Their hookup, according to the contract, was “to the electric lines of Cliffside Mills at a point known as the junction pole located fifteen (15) feet west of well, said well on the boundary line between property of Cliffside Mills and property of John Hamrick.”

By the following May the six men sold their poles and lines (and right of way) back to the Company for what it had cost: $42.60 each. or $255.60. In turn they each paid the Company a $76 hook-on fee. The Company then enhanced the lines with transformers and meters.

The Fairview operation was later merged into what was called the Mt. Pleasant Line which, by 1936, had 32 customers, including the Mt. Pleasant church and school. (Some of these had been acquired from R.G. Burris, whose company once provided power to residences from the Mt. Pleasant area to the western edge of Boiling Springs.)

Once the Company had targeted an area for a new line, it would seek an agreement from the prospective new customers that they would “take lights and pay for the current monthly at regular rates,” and also pay $75 for “the privilege of connection.” The customer would also agree to sell the Company a right-of-way, or easement across their property, for which the Company would pay 10¢ per pole.

One segment of the larger community that never benefitted from the Company’s expansion plans were residents living on Highway 120 (the “Mooresboro Road” that intersects North Main Street in front of the school). It was talked about for years, especially by those residing on the road, who were without electric power. An agreement petition was finally distributed sometime in the mid-1930s.

Before the proposed line was constructed, however, Cliffside Mills—seeing the handwriting on the wall—decided to get out of the electrical power business entirely. Duke Power, from whom the Company for the past several years had been buying and reselling power, was taking over the surrounding areas in power distribution.

A version of this article appeared in the May-Jun 2008 edition of The Cliffside Chimes, newsletter of the Cliffside Historical Society.