Work will now officially begin to restore a piece of Cliffside history.

On Sunday, the New Hope Valley Railway dedicated the Cliffside Railway 2-6-2 No. 110, or the “Old Puffer” locomotive engine and commemorated the beginning of fundraising efforts to put the old engine back to its original glory.

The intent is to restore the engine to use for public rides on a four-mile main line in central North Carolina. The start of the line is located southeast of Raleigh on Old U.S. Hwy. 1.

“It could take as long as five years to restore, depending on the funds,” said Philip White, former president of the Cliffside Historical Society. “Anytime you mess with boilers, you have to have permitting and inspections and they have already used X-ray to check the metal.

“They would like to have it fully operational within that five years.”

White was part of the dedication Sunday along with Janice (Bridges) Swing. Swing was photographed in The Forest City Courier on July 23, 1962 in a story about the engine’s final run. It was noted in the story that Swing was the youngest stockholder in the Cliffside Railroad.

It ran the 3.59-mile span of the Cliffside Railroad from the Cliffside junction, north of Cliffside, to the former Seaboard Air Line Railroad which is now part of CSX Transportation’s rail line.

The “Old Puffer” worked in conjunction with the larger No. 40 engine during its lifespan with the Cliffside Railroad Co. The No. 40 last ran on July 20, 1962 before it was sold to New Hope and Ivyland Railroad. At that time, the No. 110 was retained in the event that the new diesel electric locomotive broke down.

However, in 1963, it was sold to Echo Valley Park in Cleveland, S.C. and ran on the amusement park’s “Swamp Rabbit RR” until it was sold to Stone Mountain Scenic Railroad in 1969.

While at Stone Mountain, the No. 110 was the smallest steam locomotive and was used sparingly until Stone Mountain ceased operations.

Now, New Hope Valley hopes to restore the locomotive to its look during the height of its use in Cliffside.

That, however, will be a challenge.

“When they (New Hope) received it from Stone Mountain, it was what they called a static display meaning it was just parked outside and people could do what they wanted,” White said. “There were a lot of things missing like gauges. Steam locomotives are individually made and they have recovered the original plans from Vulcan on that engine.

“It’s like building a house. It is a specific plan for that train.”

The ceremony also kicked off a fundraising campaign with the hopes of bringing in between $350,000 and $600,000 to finish the restoration.

“You can’t just go to a scrap yard and get a part because a lot of the parts were custom-made for that engine,” White said. “A lot of those companies that built those engines are out of business now.

“It’s a personal challenge for the group to pull it off and they’ll get it done.”

In addition to dedicating the return of the “Old Puffer” another piece of Cliffside history will be getting some work done by New Hope Valley Railway.

During the ceremony, White displayed the original steam whistle from the Cone Mill plant in Cliffside for one last blow.

“We wanted to hook it up to steam and see if it worked,” White said. “We took the whistle down there and we were going to record the sound for the website but the control didn’t work.”

Officials with New Hope Valley said they will rebuild the controls to the whistle in hopes that it will work one last time.

“It’s on display now but we really want to get it to work so we can record the sound,” White said. “Hopefully we can get it to work.”

See related story and photos. And click the link below for “Moving 110 to Bonsal.”

After years of neglect at Stone Mountain. Now at Bonsal.

A few months later, all spruced up for the dedication. 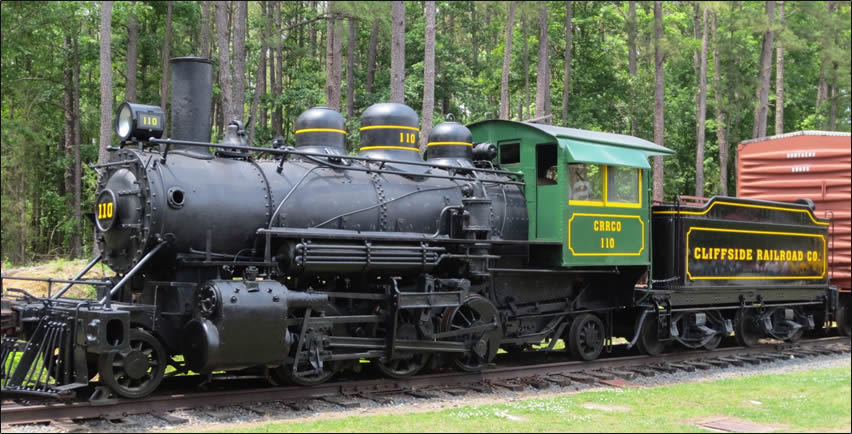 At the time of the dedication [in 2013], the “repairs” that had been done were only cosmetic. It would be years of work before the engine would actually run.