Maybe they ought to advertise Cliffside Day as occurring on the first rainy weekend in October. On Friday, “set up” day, Noah would have felt right at home. A long, peanut-shaped water-laden cell of tropical storm Tammy had settled in over the foothills and decided to stay awhile.

It poured more rain in 36 hours than the area had seen at one time in decades. See the official U. S. Weather Bureau stats at left.

Some changed their plans and decided to move their concessions and attractions indoors. But on Saturday morning, around 8:00, the rain stopped, the sky brightened and people began arriving in droves. All in all it was one of the more successful Cliffside Day events.

One of the great delights of our day was seeing some people we had not seen since high school,

notably old pals Danny Ledbetter, Charles Ray Humphries, John Godfrey (who became a minister), and Riley and Helen Dedmond Callahan. Riley and I were best friends in our school years, and spent a great deal of time making sure Cliffside was an exciting place to live in. In his retirement from Duke Power Riley keeps busy with, among other things, creating Tin Men (as in The Wizard of Oz), and placing them for sale in area hardware stores. He gave us one (see left) as a keepsake. We plan to display it in a conspicuous place for our grandchildren to admire. If you’d like one for your house, give ol’ Riley a call.

We were grateful to see again the likes of Edith McDaniel Humphries, Ben Humphries, Frank Nanny, Guy and Helen Hamrick, Ashley and Ginny Reid, Herman and Lillie Jones, Grady Franklin and many, many more.

And we were blessed to be among some relatively new and cherished friends, such as Marilyn Kerr, James Harris, Dan and Sheila Marsh, JoAnn Huskey, Joyce and Neal Hunter, Sheila Tony and the Unsinkable Molly Mintz.

Scott Davis, whose company is involved in the mill demolition/salvage process, was up in the air on Cliffside Day, taking photos of the town. Here’s one of them, showing the river’s reaction to those 11 inches of rain. 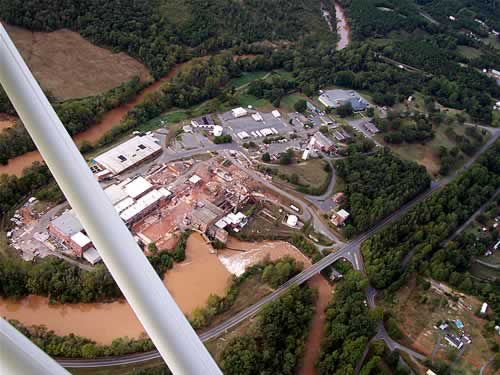 View From The Ground

Early that morning, John Fisher went down near the bridge to inspect the river’s rise. “You could feel the ground shake from the water rushing over the dam,” he said. “The water was just awesome falling over the dam, raising a mist up over the rocks below.” Here’s a picture he took of the scene.