In our pursuit of the “Cliffside story,” we’ve always been baffled that no photos of R. R. Haynes’ burial have thus far surfaced. For a man of his stature, surely his well-attended funeral was fully reported and documented. So you can imagine our excitement when one day in a phone call Jim Haynes, who lives in Carlsbad, California, happened to mention that he had a couple of pictures of the scene at the graveyard on the day R. R. was buried. Jim is the grandson of Robert Haynes (1876-1930), R. R. Haynes’ oldest son. He and his wife, the former Juanita Daves, left Cliffside for California in 1950.

Jim mailed the photos to us and we used this one in the book Cliffside: Portrait of a Carolina Mill Town (page 26) with the caption shown here:

It turns out that, although the caption is mostly correct, the photo is not of R. R. Haynes’ funeral. It’s someone else’s. After the book had gone to press we examined Jim’s two photos more closely, and discovered there was something odd about the setting. Here is the other photo (not used in the book): 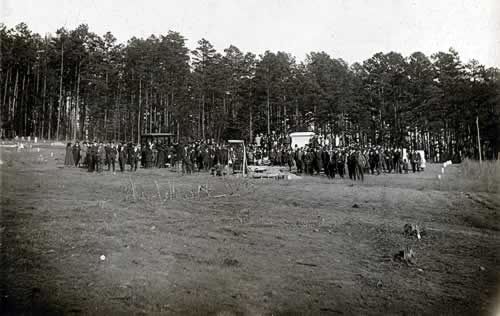 By blowing up this wide-angle view we established that both photos were made on the same day. Many of the same people, wearing the same clothing, can be seen in both photos.

A: R. R. Haynes’ massive tombstone is present. Although not impossible, it’s not very plausible that on the day of someone’s funeral his tombstone has already been erected.

B: There are no black horses in either picture. Instead this motorized hearse (or “funeral car,” as they may have called it) is visible in both photos.

C: According to available accounts, there were around 3,000 people present at the R. R. Haynes services. Nowhere near that number appear in these photographs.

D: The edges of the grave (shown at right) do not resemble the substantial vaults installed at the R. R. Haynes tomb.

E: One historical account told how the nearby school had let out for the students to attend Mr. Haynes’ funeral. A careful examination of the photos indicates that none of the children are dressed for school, but are in their “Sunday best.”

One rainy day in the late spring of 2005, Joyce and Neal Hunter and Horton Landreth, visited the Cliffside Cemetery to ascertain just what was happening on that day over 85 years ago. Here is what they determined:

1. The photographer stood at what is now the south end of Stimpson Street where it intersects with Beason Road (formerly Graveyard Street). He was facing the northeast. In the wide view, near the right edge of the photo, you can see a row of white markers heading off to the northeast. If you stand in approximately the same position today as the photographer’s, you can still see some of those markers.

2. At the time of the photograph, there was no Stimpson Street and no rock wall around the cemetery. Consequently there was much more unused space on the west side of the Haynes tomb that slopes sharply to the southwest. (When the rock wall was later constructed, the wall was backfilled, which raised and leveled the western edge of the cemetery considerably.)

3. The open grave in the photos is on the western, lower side of the massive R. R. Haynes’ monument. Children are standing on the different levels of his tomb, observing the ceremony. Mr. Haynes is actually interred on the upper, eastern side of the stone.

Without lifting a single shovel full of dirt, our amateur sleuths, by carefully surveying the scene, determined that the fresh grave in the photos is at the exact spot where a certain lady was buried in 1919, nearly three years after the R. R. Haynes interment.

Whose grave is it? It’s that of Jim Haynes’ grandmother, 39-year-old Fannie Mallard Haynes, wife of Robert E. Haynes. She died February 15, 1919. The funeral was held on the following Sunday.

A news item of her death published a few days after the funeral explains a couple of things:

* The funeral was on a Sunday, so the well-dressed children were not just out of school.

* Mrs. Haynes had lived in Henrietta for many years, so a lot of the young attendees were not from Cliffside, and not necessarily recognized by Cliffside children like Mary Womick and Lula Goode.

The death notice listed Dr. J. F. Whisnant as one of the pallbearers. He and his wife are prominently displayed in one of the photos, which suggests this is indeed Mrs. Haynes’ services. However, his presence proves nothing, for Dr. Whisnant, a very prominent dentist and a friend and colleague of the the late Mr. Haynes, could have been at both funerals. 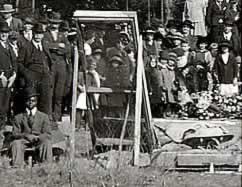 Finally, near the grave we can see a sand pile, a sieve and two wheelbarrows. In one a well-dressed black man is seated. Is he a mourner? A servant? A workman who in a few moments will seal the tomb with mortar? Behind him, the man with the moustache may be Wayne Haynes, R. R. Haynes’ brother and the deceased lady’s uncle by marriage.

We told Jim Haynes of our findings. He said his Aunt Eunice Simmons Thomas, who once lived on Church Street, showed him the photos many times during his childhood, and she apparently thought they were of R. R. Haynes’ burial. She would point out herself in the front row at the grave, and name four or five of the other kids. Eunice told him she was in the first or second grade at the time. “I guess I just stood there and said, ‘uh-huh.’” says Jim, “It never entered my mind to write [the names] down.”

Eunice Simmons was born about 1913, and would only have been about three years old at the time of R. R.’s death, too young to have remembered the event. But she would have been six or seven at Fanny Mallard Haynes’ burial in February 1919, which is consistent with the ages of the children in the graveside photo. (Now in her 90s, Mrs. Thomas lives in a nursing home in Virginia.)

As we said, chasing history is hard work. If one little detail takes this much effort to verify, how can we trust as accurate a massive history of, say, the Civil War? 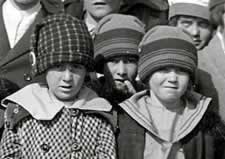 Update: A day after this article appeared, Mr. Wofford Thomas sent this email: “That appears to be my mother in the funeral picture…with her hat down nearly over her eyes. She is the little girl in the center of the photo. Actually, two of the girls have their hats down low. My mother is the one on the right. She is Eunice Lee Simmons Thomas, daughter of Moses Cecil (Mose) and Mamie Ramsey Simmons. I am Aubrey Wofford Thomas, Jr.”

We had to know more, about his kin, his memories and personal information. He replied:

I live in Washington, NC. Although my people are from Cliffside, I never lived there. My grandfather and grandmother were Moses Cecil (Mose) Simmons (1881-1969) and Mamie Simmons (1891-1963). My parents are Aubrey (1912-1974) and Eunice Thomas (b. 1913). I have few memories of Cliffside and all of those are about family from my very early youth. I moved away with my family in 1946 and returned with them on trips until I lived with Mose and Mamie north of Avondale in ’57-’59. Graduated from Tri-High in ’59 and moved on. I do know my Aunt Truby worked in some kind of grill or cafe on the big square near the mill and the alligator fountain in ’58. Truby was Jim Haynes’s mother, Raleigh Haynes his father. Other aunts and uncles: Varnell and Eufra Morgan; Pat and Eula Frye. Afraid that’s all I can remember right now. I wish I could ID others in the picture, but cannot. Jim sent me a larger copy of it a while back. Eunice is still alive, but unfortunately has alzheimers and would not remember any of it. (10/01/05)