(See the map that shows the approximate limits of the district.)

But there must have been a Buck Shoals District before that, for in May of 1919 the citizens of Buck Shoals requested an additional room be added to their – already existing – school.  (There is every reason to believe that this addition created a three-room school.) The School Board agreed, provided a special tax was voted to cover the cost. And Buck Shoals promptly asked for a special tax election to levy a tax of 15¢ per $100 of property and a 45¢ poll tax. While we find no record of the election outcome it is reasonable to assume the tax was passed since the citizens had asked for such.

In May of 1923 a delegation from Buck Shoals School District appeared before the County Board of Education and asked for consolidation with Cliffside School District. The Board favorably received the request, but action was postponed until a county wide plan could be worked out. Shortly, in June, the Board adopted such a county wide plan and in that plan was the following description of “School Unit No. 1.”

[It] shall be composed of the following schools: Cliffside, Buck Shoals, Woods, Avondale and the lower half of Ferry with the Cliffside School as the center for High School Instruction, provided that Buck Shoals and Woods may be consolidated for the better advantage of the Elementary pupils.

In August of 1923 a petition from Buck Shoals was presented to the Board asking that district No. 5-7, Buck Shoals, be consolidated with District No. 5-5, Woods, and that the school be taught at the Buck Shoal school house, and that the High School pupils from the two districts be transferred to Cliffside. Within a few days the Board ordered that consolidation as requested. In July of 1924 the County Board received a petition from the Camps School District requesting that the Buck Shoals, Camps and Hicks Grove Districts be consolidated. But the petition was denied.

Now there is a rather mysterious entry in the Board of Education minutes for January of 1927. Namely, approval was given to purchase land for the Buck Shoals white school from the Mosteller heirs and Mr. C. T. Harmon. Does this mean the school was built on land that had not been purchased? Or was it merely the case that additional land was purchased for the school site? Whatever the case we shall revisit this puzzle again. The school is shown below on Carpenter’s 1927 Rutherford County map. Highway 207, on which the school is located, later became highway 221 and then 221A. Of course 221A is now to the west of the Buck Shoals School location and the highway labeled 207 on the map is now referred to as Old 221A. (One should note that the Buck Shoals District was approximately that part of the area shown which is south of the Broad River.)

We know a great deal about the new school that was built in 1926. The dimensions of the school were probably 100 X 36 feet. We admit this is a guess but an argument for these dimensions is given at the end of this piece. The diagram below (not to scale) shows the layout as recalled by persons still living who attended that particular Buck Shoals School. The rooms are labeled with the names assigned to them by the students, and the teachers whose names are shown taught in those rooms at some time. There were never more than three teachers at Buck Shoals.

The labeling is confusing until one realizes that the names given the rooms refer to the students in them and not to the location or size of the rooms. Thus in the Little Room one found students in the first two grades, although the 1st grade was further divided into “high first” and “first”; the division was probably based on level of accomplishment upon entrance. The Middle Room held grades 3, 4 and 5. And the 6th and 7th grades were in the Big Room. The Big Room also contained a small stage and a cloak room.

In many ways the school was primitive, as one might expect. There was no electricity and the school was heated by potbellied stoves. A bucket of water was kept inside the door with a common dipper for drinking. And of course there were privies. But there was a modern (at that time) water pump outside the school, instead of the more common well with windlass. Beginning in 1933 it was possible for students to have a hot lunch each day. Then Mrs. Maude Harris, whose home was about 100 yards from the school, was hired by the county to feed the Buck Shoals students in her home. She was provided some food stuffs by the county and students could also bring produce, canned goods, cured meat and the like to Mrs. Harris and in turn receive credit for a certain number of hot lunches. James Harris recalls that his mother could feed about 15 to 20 students at a sitting.

Some of the teachers actions would not pass muster today. For example, one young sibling – about 4 years old – was brought to school once and created a disturbance. Since the child could not be sent home until the bus arrived at the end of the school day, the teacher dragged the school’s pump organ to a corner of the room and used it to create a triangular pen. She put the child into this pen and left him all day – one assumes with toilet and food breaks. Another example is considerably more surprising. Once when an older student became unmanageable he was taken and locked in the trunk of the teacher’s 1934 Ford.

In some respects the school was perhaps more modern than might be expected. The 6th and 7th grades had a baseball team that played against other similar schools. And the students put on plays in the Big Room which the community attended.
As was the case in many small communities, the school provided a center for social life at Buck Shoals. In addition to the plays mentioned above, cakewalks and box suppers were held in the school house. Live music by local musicians accompanied these events and no doubt there were other musical performances given at the school. So it was likely sad for the community to see the school disappear via consolidation.

Consolidation came to Buck Shoals in two steps. The 1934-35 school year was the last year 6th and 7th grades were taught at Buck Shoals. Beginning with the opening of the 1935-36 school year all 6th and 7th grade students from Buck Shoals attended Cliffside School. Hence Buck Shoals went from a three-teacher school to a two-teacher school; and we know that those two teachers were Mrs. Ruth Hatchette who also served as principal and Mrs. Natalie Phillips. (In addition to those already mentioned, George Spake and Nina Mosteller also taught at Buck Shoals at some time.)

The next step came at the September 1937 meeting of the County School Board. Then a delegation from Buck Shoals community appeared and complained about the inefficiency of their school. It was the opinion of the delegation that it would be wise to consolidate Buck Shoals with Cliffside. The Board took the matter under advisement but no immediate action was taken. However in 1938 the Buck Shoals School was abandoned and the Buck Shoals District was consolidated with the Cliffside District.
Now, as the old camp song says, you may think that this is the end; but it isn’t. In September of 1938 the School Board advertised for sale the Buck Shoals building and grounds, along with several other properties. In October the Board rejected all offers. But remember the mysterious purchase of land for the Buck Shoals School in 1927, after the school had been built? Well it must have been mysterious indeed, for in 1939 the Board discovered they were not sure they held title to that land, and the Board ordered the Superintendent to take “whatever steps were necessary to get a clear title to Buck Shoals School property”. We suspect there was no little difficulty getting that clear title since in January of 1940 Chas. Haynes, who had attempted to buy the school building, reported that he could no longer use the Buck Shoals school building as he had planned, since it had taken the Board a year to get clear title to the property.

Finally, here’s why we believe the dimensions of the Buck Shoals School was approximately 100 X 36 feet. West northwest of Polkville there is a home which was originally a Black School; this on the authority of a lady who attended school there in the late 1940’s and early 1950’s. This house is less than 5 miles west of Brooks Chapel and approximately 100 yards west of the Rutherford-Cleveland County line. That this house is the old Buck Shoals School seems to us almost certain. And the dimensions of the house are approximately 100 X 36 feet.

An Approximation of the Buck Shoals School District (Outlined in red) 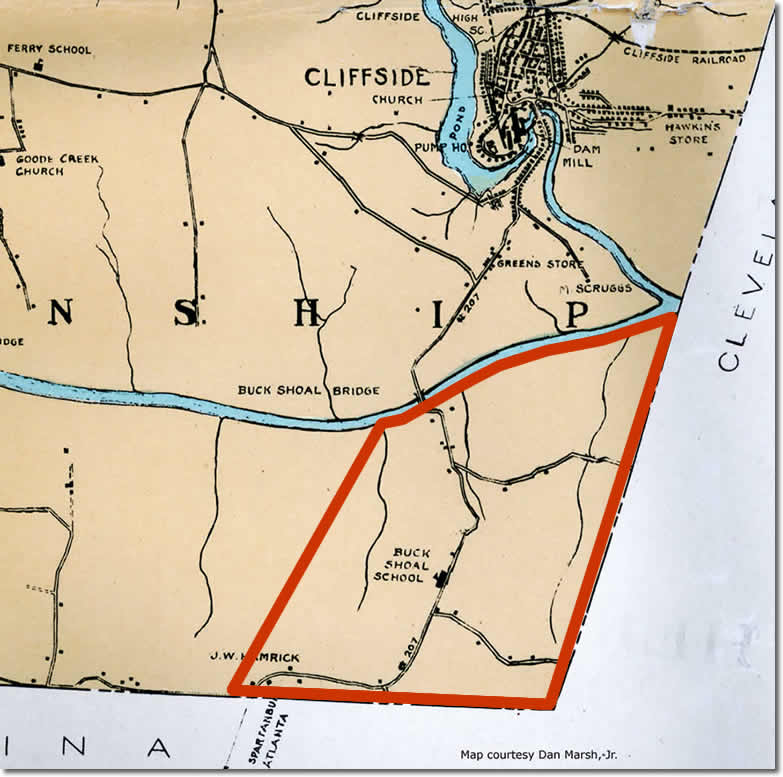 Key to identities below photo. 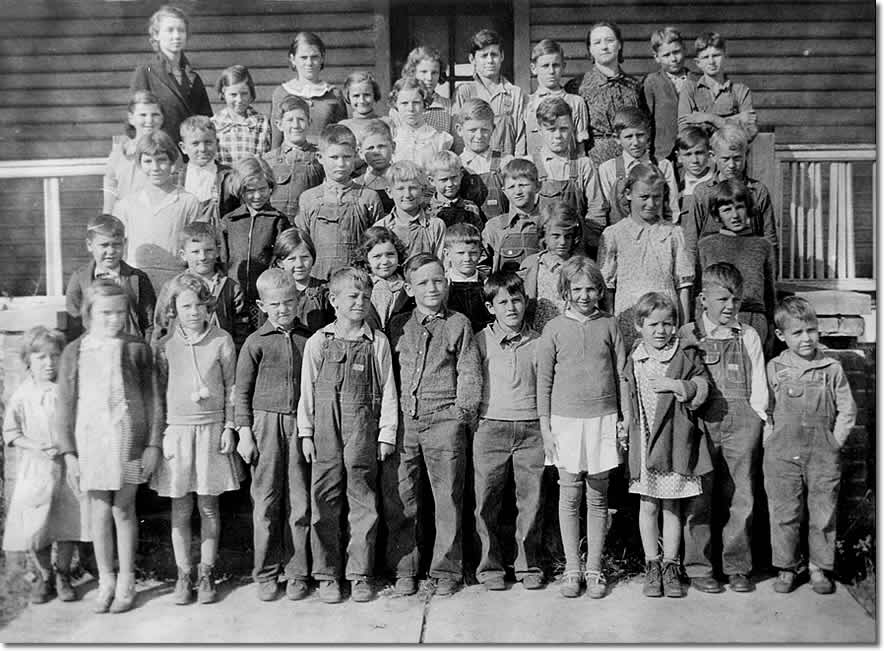