We ran across this compelling photograph in the collection of Hazel Haynes Bridges. It is of a huge train wreck that occurred in 1911 between Ellenboro and Bostic. Don’t you know that everybody in Cliffside who could get hold of a buggy flew off up there to see the big event and “help out?” 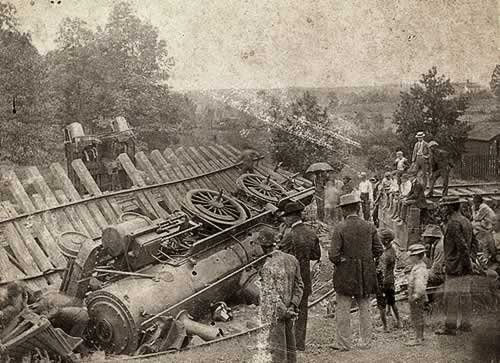 The bare facts of the matter were written on the back of the photo (along with the apparent signature of Eula Haynes, a daughter of R. R. Haynes.)

“A Seaboard Airline train crossed a wooden trestle between Ellenboro and Bostic in Rutherford County—at 5:15 P.M.—May 28, 1911. The trestle collapsed, dropping the train 40 feet into Watkins Creek and killing five railraoad workers. Locomotives 704 and 706 were pulling the ill-fated coal train. This is locomotive 706.”

There’s more to the story. Accompanying the photo was a news article from The Charlotte Observer dated May 28, 1991, that sheds considerable more light on the event. The article—written by Joe DePriest, a reporter who has done many stories on Cliffside—was headlined “Tracking a Train Mystery” and began with different photo of the wreck that reveals much more of the carnage and activity around the site.

Lincolnton—Trains never much interested Bill Beam—that is, until he saw the old black-and-white photo in a friend’s scrapbook.

He couldn’t get the scene off his mind: A train wreck with the cars scattered all around the tracks and dozens of people standing around, some even climbing onto the battered cars.

Beam, president of the Lincoln County Historical Association, wondered where and when the wreck took place. There were no clues in the photo or scribbled on the back.

But with a bit of perseverance and a lot of luck, Beam solved the mystery and discovered that one of the region’s worst train wrecks had occurred 80 years ago today.

At 5:15 p.m., an eastbound Seaboard Airline coal train crossed a wooden trestle between Ellenboro and Bostic in Rutherford County.

A copy of the photo will be displayed at the Lincoln Cultural Center when the new arts center and museum opens next fall in the former First Baptist Church on Main Street.

The new Cherryville historical museum, scheduled to open in August, will also get a copy.

“All this started last year when I got a call from a man in California about a train wreck in 1880,” says Beam. “His grandfather was on the train.”

As Beam researched the 1880 wreck, he ran across the unidentified photo in a scrapbook belonging to a friend, Pru Beam of Cherryville.

Examining the photo closely, he could make out the number 704 on an overturned steam engine.

“I happened to mention this to another friend, Howell Stroup in Cherryville,” says Beam, “And he said there was a train engineer buried at Mount Zion Baptist Church cemetery in Cherryville.”

Beam found the marker. The name L. Mack Lindsay was on it, along with the design of a steam locomotive with the number 706.

Using the date of Lindsay’s death, May 28, 1911, Beam searched back copies of the Charlotte Observer. That’s where he uncovered the answers to his questions.

Seaboard locomotives 704 and 706 had been pulling the ill-fated coal train.

The bodies of Lindsay and a fireman were trapped in the twisted mass of debris. A 150-member work crew spent two days digging through the rubble and got Lindsay out of engine 706 on May 30.

In the photo Beam found, a crane had pulled engineer Rod Green’s locomotive, number 704, out of the creek. Green, who lived in Monroe, was also killed in the wreck.

Lindsay, 45, was a veteran engineer. “He was found near the cab at the extreme bottom of the massive pile of coal and steel,” the Observer reported.

“His skull was crushed, his bones broken and various bruises on his whole body,” the paper said. “Train No. 40 brought him to Shelby at 8:20 this morning and after being prepared for burial by a local undertaker, he was sent on a special train to his home in Cherryville.”

In the minutes of Cherryville’s Masonic lodge, Beam found a note that Lindsay wrote on May 24, 1911, four days before he died.

Although he lived in Monroe, he was member of the Cherryville lodge. In the note, he apologized because he probably wouldn’t attend a June 5 meeting.

“I hope you all will excuse me,” Lindsay wrote, “It seems to be harder for engineers to get off than others.”