Home » History » Articles and Stories » A Shortage of Kudzu

A Shortage of Kudzu?

As hard to believe as it may be, Rutherford County once faced the possibility of a shortage of kudzu. In mid-1941, relations between the U. S. and Japan, from which kudzu seed was imported, were becoming increasingly strained. The soil conservation service sent out an appeal to farmers to harvest “every ounce of kudzu seed that can be located,” for no imports were likely in 1942. The most promising places for locating a good seed crop, they said, are large gullies covered with kudzu, or fence rows, vacant lots, porches, and old home sites.

The impending shortage must have been averted, for the Forest City Courier reported in March of 1942 that Rutherford County farmers would plant 50,000 kudzu plants on approximately 100 acres of eroding land the following spring.

Woodrow M. Brown, of the Soil Conservation Service, in Forest City, advised that “best results have been obtained where plants were carried to the field between wet sacks or in damp sawdust.” 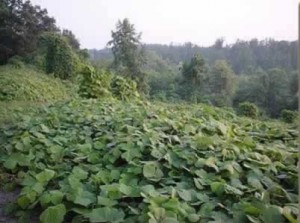 It seemed like a good idea at the time. But if they had known then what we know now, a good portion of old Cliffside would not be engulfed in the stuff. 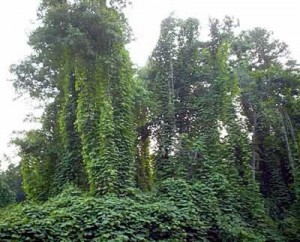 These photos show the area once called Railroad Place (shown in area “E” of the town map). If you were to walk beside the Cliffside School and head west toward the river, you would soon be engulfed in a sea of thigh-high kudzu vines. If this land is ever to be reclaimed, it will “take some doing,” as we Cliffsiders would say.

Once a Charlotte Observer columnist, with tongue in cheek, described the proper method for “feeding” kudzu. First you cover the infested area with cement blocks, then soak the ground throughly with used motor oil. In no time, he said, the plants will double their size and spread.

In Alan Weisman’s provocative book, The World Without Us, in which he speculates on the future of our planet if we, the human race, were just suddenly to vanish, he attributes a large role in Earth’s immediate future, after our disappearance, to our friend kudzu.

With no more herbicides, weeds…would invade our industrial farms and our vast monocultured commercial pine plantations—although, in America, for a while the weeds may mostly be kudzu. It’s only been around since 1876, when it was brought from Japan to Philadelphia as a centennial gift to the United States, and eventually something is bound to learn to eat it. In the meantime, without gardeners endlessly trying to uproot the ravenous stuff, long before the vacant houses and skyscrapers of America’s southern cities tumble, they may have already vanished under a bright, waxy green, photosynthesizing blanket.

A shorter version of this article appeared in the Cliffside Historical Society newsletter for Jan-Feb 2007.