For the last couple of years, we’ve presented columns from the early 1930s in the Forest City Courier written by Francis Clemmer Thompson, known in those days as Skipper. We hope you’ve enjoyed these columns; there are only a few more to come.

We are sorry to report that Skipper Thompson died recently, at a nursing home in Albemarle, N.C. He was 94 years old, and in his last days had only his thoughts and memories to sustain him, for he was both blind and deaf. (See his obituary.) Although he left our town in the early 1940s, we’d like to believe that, in his mind, he often returned to Cliffside.

There are six new columns for you to enjoy, from March and April of 1935.

The Steam Station we remember from years past is dwarfed behind the stack of the new modern unit 6. Duke Energy released this series of photos to fill us in on the goings on just over our horizon.

Cliffside, North Carolina: The First Half Century covers in great detail the history of Cliffside from its earliest beginnings in 1899 through 1959. In more than five years of research, author Don Bailey examined essentially every public record available that touched on Cliffside.

Among those records were the many Rutherford County newspapers in the libraries of Isothermal Community College and the Genealogical Society of Old Tryon County, the Criminal Dockets of Rutherford County, the minutes of the Rutherford County Board of Education, copies of The Southern Textile Bulletin in the collection of the Strom Thurmond Institute at Clemson University and the Cone Corporation Records 1858-1997, housed at the Wilson Library of the University of North Carolina.

The goal of the book is to give the definitive history of Cliffside up to the year 1960.

On the rare occasions the Cliffside Railroad bought a “new” engine, it had to be “brought home” by railroad men like Shirley White (right) and John Padgett.

Cliffside’s former Baptist minister from 1914 to 1921, Rev. D.J. Hunt, wrote letters to a couple about to be wed (by him). What we learn from the letters is that we shared Rev. Hunt with another church. Who knew? And who preached at Cliffside in his absence every other Sunday?

Across the top of the dam at the Cliffside Mill there is a two-foot-high wooden extension that wears out every 30 years or so, and has to be replaced. From all appearances, it was last replaced about 35 years ago. We found an old document that shows who might have done it in 1970, and for how much.

Progress on the March

The new Swing home on Old Main Street is taking shape. It’s the first new home to be built in Old Cliffside since the 1940s, and part of a grand new plan to repopulate Cliffside.

We wrote an article to complement our new Old Mill picture gallery. In it we try to describe what we saw, how the mill had changed over the years, and what feelings the old place evoked. 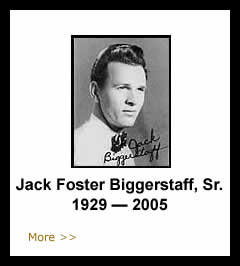 The Boys of Summer

In the era when people grew their own food, there was a community cannery in Cliffside. Operated mostly by high school and college students, it was open in growing season and catered to anyone who needed to “put up” their fruits and vegetables. Jim Ruppe relates the history and traditions of the cannery, which was located very close to his family’s home. 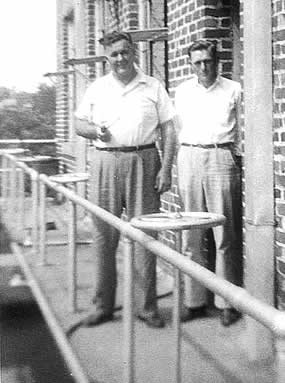 Young Ben Honeycutt’s father managed the facility, and Ben spent much of his time at the fascinating building on S. Main St. 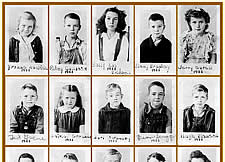 It may not be the entire collection of 2nd and 3rd graders of that year, but it’s close. Bonus: Uncle Ben and Mrs. Johnson.

We’ve added over 30 “new” columns from the Twin Reporters, all from 1937. Read what Grandma ‘n ’em were doing back then. 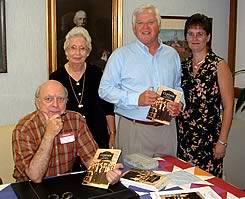 They had a special “Cliffside” room at the Blue Moon Gallery of Art and Fine Crafts’s grand opening, where we greeted over 200 people and signed their books over the weekend of Aug. 20-21, 2005. We actually ran out of books before it was all over. In the photo, from left, Reno Bailey, Joyce Atkinson Hunter and Dub and Terry Orr of Chesnee.

The moon wasn’t blue Friday night, as predicted, but was a brilliant orange and appeared unusually large as it rose in the east over the old Baptist Church.

Thanks to John and Beth Fisher for letting us intrude on their great opening.

Much has been written here and elsewhere about H. Lee Waters, the Lexington, N. C. photographer who made in 1937 and 1940 the “Cliffside movies.”

Mr. Waters work has now been immortalized. The Library of Congress, which each year adds 25 significant motion pictures to its National Film Registry, chose one of Mr. Waters’ films for its 2004 list. Read what they chose, and why.

Leonard Jolly, Cliffside native and 1967 Chase graduate, has written a compelling novel based on the life and trials of a boy like himself in the ’70’s, growing up in a company mill town that’s rapidly changing for the worse.

It’s titled “Soul of Clay,” and you can read about it here. He’s says it’s pure fiction, but you might associate a character or two with someone you know. And the fictional town, Mill Creek, might bear some resemblance to some place you used to live.

After six months on the bookshelves, we have a rough idea how well Cliffside: Portrait of a Carolina Milltown has sold. Although breaking no records, it has done rather well.

What was your phone number in ’48? Find it here in this comprehensive county-wide directory. You’ll have fun viewing the quaint old advertisements with their primitive graphics. Quite different from the slick ads of today.

For a few years in the 1930s, a young Cliffside native named Francis “Skipper” Thompson wrote weekly columns for the Forest City Courier. In them he talked about movies, music, radio shows—and personalities and goings-on in Cliffside. We’ve posted 83 of his columns.