Not a mere web presence, we’re more like a library, or a museum, or magazine, or grandmother’s dusty old trunk in the attic.

It was established in 2002, and over a span of 13 years, by the efforts of society researchers and the contributions of many, we’ve created a valuable repository of Cliffside’s history, including profiles of many of its people and a broad overview of mill town culture.

We’ve scanned thousands of images and documents, captured the memories of dozens, screened miles of newspaper microfilm — in a mission to collect and preserve every available fact and memory of Cliffside’s 100 years in the sun.

Remember Cliffside is a labor of love, by someone with ties to the town, who were able to devote the time and skills required to craft and maintain a complicated site.

Betty and Reno Bailey retired in mid-2001. Wanting a pro bono project to keep them busy, they chose to create a website about Reno’s home town, expecting there to be only a few pages of articles and photos. Immediately a deluge of vintage photos, yellowed clippings, manuscripts and artifacts began arriving from contributors. New material is regularly created and discovered.

Betty is co-designer, researcher, archivist, transcriber and scanner-in-chief. Reno is managing editor, head writer, coder and webmaster, using skills he gained in a former career as a creator-producer of TV programs and commercials. As has been the case for over a dozen years, almost every day one or both of them can be found working on some facet of the site.

The Baileys are in their eighties. They want to spend their remaining working years putting Remember Cliffside in good shape and good hands. 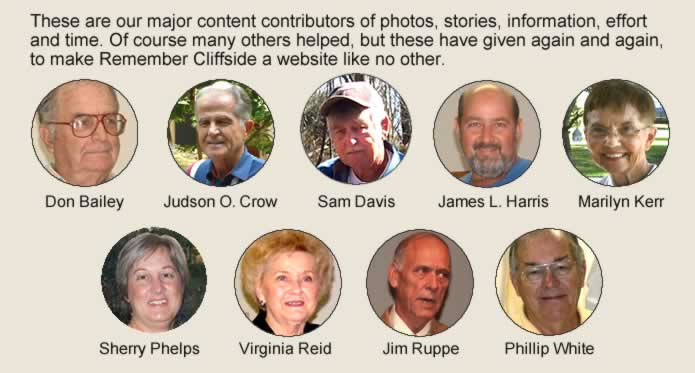 Often called a “model” village, the old Cliffside was a one-industry, cotton mill town. It has a remarkable legacy thanks to the progressive outlook of its founder, who provided for and treated his workers better than most employers of the time. But as the decades passed, it became clear that such towns were at the mercy of the textile industry’s fortunes. Starting in the mid-1960s, the paternalistic model of mill corporations changed, and Cliffside, and many other villages like it, began a slow decline. Workers were forced to move away from town; their substandard housing razed. By the ’80s, without a customer base, the town’s commercial entities had departed, their buildings destroyed. In the early 2000s, the textile industry finally collapsed, and so did Cone, the company that owned Cliffside. Now the town is a quiet, mostly empty space, and all that remains are a school, two churches, a funeral home, a clock tower, a few residents—and memories.

“I am an editor at an architecture and design magazine called Modernism, and I’ve been devouring your site ever since I ran across it while doing some research on a future article about suburbia. Some sites are good, a few are excellent, but “Remember Cliffside” is jumpin’-Jehoshaphat magnificent.”

“I just wanted to drop you a note to thank you for this website. I found it when doing web searches using my family members’ names. I never dreamed that I would find so much information about my own family. …
“Also, the historical pictures of Cliffside are amazing. I’m 30 now and I can still remember some of the buildings in the pictures from my childhood visits to Cliffside. Sadly, many of those places no longer exist. That’s why I think that your website is so important.”

“Your ‘Remember Cliffside’ is a most delightful site! I have enjoyed it, having stumbled on it while surfing the web for information on the Golden Age of Radio (of all things!). …
“[T]hanks for a delightful excursion into the past; I’ll be coming back for more!”

Modernism Magazine- “I can’t tell you how impressed I am with the ‘Remember Cliffside’ site. What a wealth of information and images! … [K]udos for an outstanding community history site—the best I’ve ever seen. It is a true gift to the residents of Cliffside and Rutherford County, and to anyone who is interested in the history of ‘regular folks.’”

“I just wanted to say how interesting your site is, and how much I enjoyed looking at all the pictures and reading about the history of Cliffside! My company is currently doing an upgrade to the Cliffside Steam Station. I am not on that project, but after visiting your site, I want to be!!
“Many thanks should go to the people of Cliffside who have worked to keep the history alive! I hope to be able to visit in the near future.”

“This is an unbelievably great website. Wonderful information and very well put together. … You have put together a treasure. It has wonderful history and information, compiled with wisdom, humor and love. Very enjoyable.”